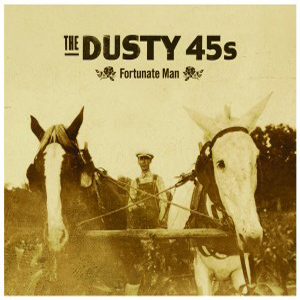 Infused by a passion for American roots music in all its varied forms, The Dusty 45s’ sound blurs the line between genres to create a style that is, in it’s final distillation, entirely fresh and new. Singer/Songwriter, Billy Joe Huels, paints his illustrative and personal stories with a signature ’65 Gibson steel string guitar, and combines elements ranging from honky-tonk and swing to pure rock. Enter in Seattle’s finest with top-notch vocal harmonies, twangy guitars, upright bass and drums, top it off with Huels’ fiery trumpet and The Dusty 45s’ unique sound is complete.

Professional, confident, and experienced, The Dusty 45s play to packed houses from coast to coast. Six independent releases have earned the band regular airplay, glowing reviews, and sales reaching over 20,000 units in the U.S. and abroad. The band has appeared alongside countless other major artists and entertainers, and in 2008, they were honored to meet Barack Obama and perform for his campaign.

Billy Joe Huels, trumpet/guitar/lead vocals
Founding member, Billy Joe Huels’ songwriting skills, charisma, and commanding stage presence has kept The Dusty 45s at the top of the Seattle music scene. Ever the consummate entertainer, he recently starred in the title role at The 5th Avenue Theatre as Buddy Holly in their production of Buddy: The Buddy Holly Story.

Jerry Battista, lead guitar/vocals
Blues/rock and roots veteran Jerry Battista has been the featured lead guitarist in The Dusty 45s for over four years. Formerly, he was a member of several top Northwest bands, including The Allies and Edison Jones. Battista also fronts his own group and continues to be a popular draw in clubs throughout the Northwest.

Kelly VanCamp, drums/harmonica/vocals
Originally from Olympia, WA, Kelly relocated to Seattle in 2000 and has made a significant impact in the rock, roots and ska scenes, performing and recording with his own bands as well as a wide variety of acts including Mike McCready's project, Flight to Mars. VanCamp also starred along with Huels in Buddy portrayingthe legendary Big Bopper.

Jeff Gray, upright bass, vocals
Jeff Gray grew up in Georgia and now hails from Bellingham, WA. His unmistakable sound is an integral part of the Americana roots rock engine of The Dusty 45s. He was a member of Bellingham's Footstompin' Trio and the Gadjo Gypsies. Additionally, he expresses his talents writing and arranging for a wide variety of Northwest groups.