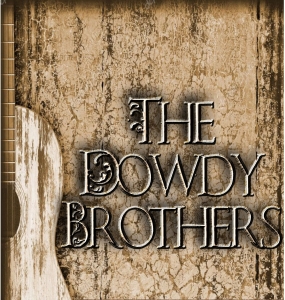 First they were just brothers, watching at the feet of their talented bluegrass father and uncle, who toured as The Bluegrass Brothers. As they grew into young men, they became Bluegrass Brothers as well, joining the band in their teens.

And now Steven and Donald Dowdy are The Dowdy Brothers, as they will be known professionally, having struck out on their own after lengthy apprenticeships under their father Victor’s tutelage.

These two have been singing together since they could form the words to songs they had heard their daddy sing. They each have memories of sitting on the front porch of their family home in the mountains of Catawba, VA, imitating the music that Victor and his brother Robert made. There was never any question that they would join the family business when they were old enough, and both found their way into the band as the years went on.

Donald and Steven have appeared on several Bluegrass Brothers albums, with Donald particularly noted for his soulful renditions of mountain ballads. Their new venture will retain the hard-driving, traditional mountain bluegrass sound that has been a Dowdy trademark, with Steven playing the aggressive upright bass style that Victor exemplified, and Donald playing “wronghanded” mandolin.
Joining them will be Tommy Conner of the legendary Conner Family, who have long associations with the Dowdys, Mason Fisher on banjo, and Cody Bauer on fiddle.

Bluegrass lovers have long appreciated that special impact that comes with sibling harmony, and the Dowdys aim to bring that in spades. The new band is headed into the studio now, with plans to release a 2-track EP in the near future for bluegrass radio.

Speaking jointly, Steven and Donald expressed their gratitude for the folks in bluegrass who have welcomed them for so long.

“The Dowdy Brothers would like to take this opportunity to thank everyone for their continued love and support, and they look forward to playing music and seeing their friends and fans in the near future!”


You can view our Facebook Page at https://www.facebook.com/TheDowdyBrothersBand/
You can also find our website at www.thedowdybrothers.com
Which includes videos and promotional pictures.
Please contact Steven Dowdy for booking at 540-352-0284