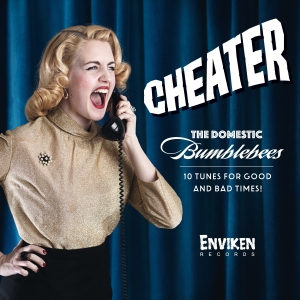 The Domestic Bumblebees – Cheater (2015)
It’s been six years since their last album “Crying For More” was released so it’s about time.

They’ve been doing gig’s on and off during this time but as Daniel and Tobbe has been recording and touring with the Swedish artist Amanda Jensen and Johan joined The Playtones, time has been very limited for all the members.

“Cheater” has been in the making for some years as they have hit the studio in between tours but it isn’t until this year they had the time to finalize it.

The Domestic Bumblebees is now hitting the road again and a tour of Europe kicks off in early June and from there they’ll continue to tour all over the place during the year.

As all three previous albums have been very successful and the band have remained in high demand at Blues and Rockabilly festivals everywhere, off wich they have played most of them over the years.
Now with a new album coming up we are sure that many more promoters and fans will discover them.