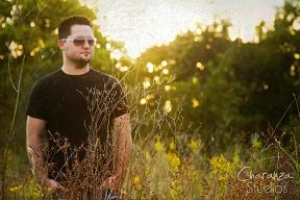 Best in Texas Music, 10 Questions with Britt Lloyd
The Britt Lloyd Band recently released its third album Conglomeration and is currently enjoying time with family and working on writing for their next album. Britt Lloyd dishes about all the things he loves, including his beloved Aggies.

Britt Lloyd Band by Jason Jones
I haven't been on the radio for about 3 years, but a few things linger...

Swag arrived at the station every week or so. Most of it we would give away, but the occasional XXL t-shirt, eagerly awaited CD and, of course, koozies of every shape and size, ended up going home with me. I have a pretty decent collection of koozies, all of which get used on a regular basis by visitors, friends and family.... but there is this one in particular that has hardly ever left my side since I got it. It's the perfect size, weight, level of flexibility, and the perfect hue of military-grade European Woodland camo.

Britt Lloyd on News at 4
Britt Lloyd was on First News at Four Friday, July 19.

He talked about his band's music, which he calls mostly rock with a little country. He also performed his song "7/4."


Britt Lloyd is one of the occasionally overlooked but consistently talented products of the long-fertile Brazos Valley area of the Texas music scene, a righteously talented guitar-slinger and songwriter who absorbed elements of regional country, earnest '90s mainstream rock and classic Stevie Ray Vaughan/ZZ Top blues-rock into his signature sound. Blessed with a brawny, expressive voice and a well-practiced, versatile guitar style, he broke a too-long streak of no new material by releasing Conglomerate in early 2013, a hard-driving live/studio combo to re-introduce his gifts to the many fans who've seen him play some of Texas' biggest venues and open for some of its biggest acts.

The Britt Lloyd Band New Album
New Album "Conglomeration" hits the stores 2/5/13. It will be available for download on all the major digital companies (i-tunes, amazon, rhapsody, etc) at that time.

If you would like to preview the album. Go to our web site : www.brittlloyd.org and click on the album "Conglomeration" icon.

The Britt Lloyd Band is selected to compete in the Bud Light Battle of the Bands
http://battleofthebands.budlight.com/houston/36371/

Go to link above to vote.

Check out the song and video tribute Jerrod Johnson wrote to Texas A & M. The first video has over 50,000 hits, and this on has over 20,000.
Produced by Britt Lloyd

http://www.txmusictv.com/blog/under-the-radar-14-britt-lloyd.html
The young artist (and still-new father) already has two albums under his belt as a bandleader and a couple more on the “producer” column of his resume via friends of his like Ben Schane and Brian Coy & the Remaining Few. He’s also opened for some of the biggest acts and played on some of the most prestigious stages in the Lone Star State, bringing his superlative chops as an axeman and gritty pop-rock songwriter wherever he goes.


'My favorie song on the new album "The Ink" is Dresser Drawer, mainly because it rocks b___s.'
Shayne Hollinger
Mandatory FM


"Britt is a current day John Lennon. If the Beatles were still together today, this is what they would sound like."
Bobby Lerma, owner Badlands FM


www.texasreddirtmusic.com
Author: Doc
""This album is wonderful not only in it's content,but it breaks new ground in music (and I don't throw this out carelesssly)"


"Lloyd employs a multitude of production,guitar,and harmony tricks that add a surprising depth to his tunes."
"Walk This Ground', is one of the freshest things to hit Texas Music this year."
Lone Star Music Magazine