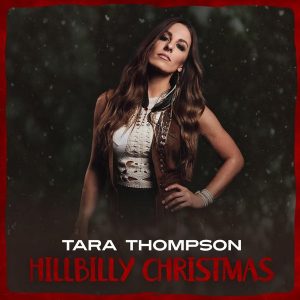 A self-described "Hillbilly from East Tennessee," Tara Thompson was raised in the foothills of the Great Smoky Mountains, surrounded by the sights and sounds of small-town life. Bars, mobile homes and lawns dotted with pink flamingos would all influence her songwriting. Growing up in Tennessee, Thompson was always a huge country music fan and even spent many days and nights watching her cousin, the legendary Loretta Lynn, perform. As soon as Thompson turned eighteen, she took off to Nashville and instead of using her famous cousin’s connections, decided she wanted to make it as a country singer all on her own. She began covering classic country songs at Tootsie’s Orchid Lounge as well as a few other local honky-tonks.

While in Nashville, Tara began to gain a following while playing at Tootsie’s Orchid Lounge and eventually signed a record deal with Big Machine Label Group's Valory Music. Tara’s music is heavily influenced not only by her cousin Loretta Lynn but also other classic country female voices and it is clear that she writes about her own country roots. Her songs stand out in today’s pop-country dominated market due to their classic feel and Thompson’s authentic stories and southern twang.

Tara's brand new Christmas album is literally Tara's life in songs. “Christmas in a small town usually means you are house hopping and more than likely drinking moonshine and someone may or may not wind up in jail,” says Thompson, and her album puts this into a story.
From the album, “Willie Nelson Tickets” is a Dear Santa letter with one wish, a pair of Willie Nelson tickets. “I’ve been obsessed with Willie Nelson for as long as I can remember, he is my favorite songwriter… I’ve only gotten to see him live twice” she says. “Christmas Eve” is a story from her heart that many will relate to. “My fiancé travels for a living and is never home on Christmas. It’s a song about missing loved ones during the holidays.”
In addition to the nine original songs on Hillbilly Christmas, Thompson includes a cover of the classic Elvis Presley song “Blue Christmas.” She says “Covering “Blue Christmas” was a no brainer. I absolutely adore Elvis. He’s the king and I think we all have a little bit of a blue Christmas without him.”