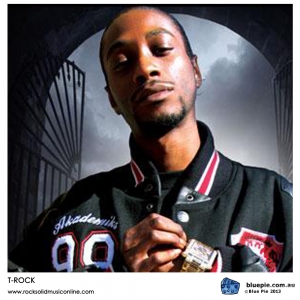 T-Rock developed his passion for rapping throughout his childhood in his hometown of Atlanta, Georgia. He released his first album titled ‘Throw Yo Neighborhood Up’ in 1996. The album was produced by underground producer ‘Brandon McKinney’. Hip Hop stardom ‘MC Mack’ soon discovered the tape and brought T-Rock and fellow members ‘DJ Paul’ and ‘Juicy J’ to fame for the world to discover! The then only seventeen year old rapper signed to their label ‘Hypnotize Minds.’

The recognition was massive and global. With the success of this ground breaking album, T-Rock was able to break away and to self and co-produce his works. With passion and dedication to keeping in contact with his fans he was able to build steady and constant sales of his independent releases. His fan base is dedicated and strong and numbers of 20,000 and growing. Sales of his independent released albums are well over 500,000 and something that he says could be high as many bootleggers would independently press his work and that is something that he is not bitter about as this has helped to get the word out and build his fan base. In recent times his independent release “Conspiracy Theory,’ has sold over 20,000 physical CD’s and still selling today.

T-Rock’s hot new album titled, ‘4:20/ Reincarnated’ is out now through Blue Pie for the world to enjoy! It is available at all leading digital retailers on the planet! We look forward to more massive success.

T-Rock is a Blue Pie artist and and is published by Blue Pie Publishing USA (ASCAP) for selected titles.