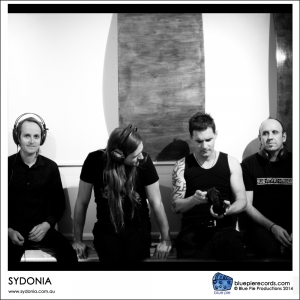 In 2006, following the release of a string of EP’s, Sydonia independently released their first album “Given to Destroyers” before headlining a national tour. Their first Single “Sorry” was screened on Channel V and stayed in the top ten most requested for two months. Three of their singles from “Given to Destroyers” also received Triple J airplay. The following year they were personally invited to tour Australia with Lamb of God (USA) after Randy Blyth heard Sydonia’s OZ debut ”Given to Destroyers” playing in an Australian record store. Sydonia then toured the east coast of Australia with Stone Sour (USA) and were subsequently invited to tour the U.S.A with Stone Sour & Dirty Little Rabbits (USA).

In 2008 Sydonia toured the east coast of Australia with Mammal and were again requested to tour nationally with Slipknot (USA) & Machine Head (USA). They then toured Australia again the following year with Dead Letter Circus along with another headlining tour.

In 2010, legendry Producer/Mixer Colin Richardson came on board to mix Sydonia’s single “Ocean of Storms” from their second album. The same year, Sydonia also supported Korn on their Australian tour and Lamb of God’s Randy Blythe played two songs with Sydonia for their Halloween “Creep Show” event. Sydonia played three days of the 2011 Woodford Folk Festival which draws over 100,000 people and toured with jerrico down the east side of Australia.

Sydonia’s released EP “Waiting For Words That Don’t Exist” in 2012 to rave reviews! The five track EP produced singles “TL” and “Words”. To celebrate the release of the EP they once again toured Australia. As at April 2019, Sydonia have hung up their instruments and retired. We are always hopeful they will return to the stage and get back into the studio to create new music for their global fanbase.