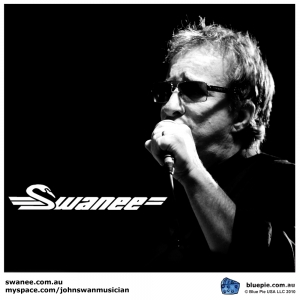 John Archibold Dixon Swan was born in Glasgow, Scotland on 15th March 1952. He migrated to Australia with his family in 1961 and took up residence in Elizabeth, just on the outskirts of Adelaide. When his mother remarried in the mid-1960s, he was the only child to keep the surname of his biological father, who was an adept boxer. His younger brothers Jimmy and Alan Barnes took the surname of their mother.

Swanee started playing the drums at an early age and became entranced with Blues, Soul and Hard-Rock. He left school by the age of 13 to pursue a career in music. He joined his first professional band Happiness a year later. At the age of 17 he enlisted in the Australian Army, and was later discharged after two years of service.

In early 1974 he joined The James Wright Band as a drummer, and by the end of the year he joined the Adelaide band Fraternity as lead vocalist. His brother Jimmy Barnes joined the band and Swanee switched roles to drums, but eventually resumed his duties as lead vocalist after Jimmy Barnes left Fraternity to join Cold Chisel. During this time, Swanee played drums for Jim Keays’ Southern Cross. In 1976 Swanee moved on and left both bands.

After he left Fraternity and Southern Cross, Swanee became the vocalist for Feather (Blackfeather) in 1977. The band recorded only one single with Swanee called “Girl Trouble” before he left in 1978 to establish himself as a solo artist.

In 1978 Swanee released his first solo single “Crazy Dreams”. An album followed shortly after called “Into the Night“. This album generated several other singles, but they were met with little commercial success.

In late 1981 his version of “If I Were A Carpenter” became a national hit, reaching No. 5. The single was a precursor to the 1982 album “This Time It’s Different”, which spawned the hit singles “Temporary Heartache” and “Lady What’s Your Name”, both of which propelled Swanee to national fame.

Swanee took advantage of this increased popularity by releasing three hit albums in succession: the live album Ready For Action (1983); the greatest hits albumDays Gone By (1984); and Bushido (1985). During this time Swanee featured in an advertising campaign for West End Drought, a South Australian beer. The brewer provided financial support to Swanee’s tours and he in turn appeared in the company’s TV commercials.

In 1985 Paul Christie of The Party Boys was considering a new front-man to replace Angry Anderson. The new singer needed to have, by his own admission, “the best Rock ‘n’ Roll voice in the country”. Swanee was asked and in 1987 he became the new lead vocalist for The Party Boys, a touring band with a floating membership that included Richard Clapton, Marc Hunter, Alan Lancaster and Joe Walsh, among others.

Swan’s tenure with the band proved to be the group’s most successful period. A cover of the John Kongos hit “He’s Gonna Step On You Again” was a No. 1 hit, which was followed up by a version of Argent’s “Hold Your Head Up” and the song “Gloria”, both of which became Top 10 hits. Both singles were from the band’s self-titled album, which reached No. 18 in the country.

Swanee’s deal with the band originally meant he would only stay long enough to record the album and complete a tour supporting it, but after being briefly replaced by Graham Bonnet, he returned to the Party Boys line-up, and stayed until 1989 before going solo again.

Swanee’s career slowed down during the 1990s, releasing only two singles and the album “Heart & Soul” in 1997. Swanee was still touring extensively around the country when his hard-partying lifestyle finally caught up to him and was negatively affecting his health: “I wasn’t getting better and the music was suffering. It wasn’t up to standard”. In 2000 he made the decision to come off the road and become sober. Shortly afterwards he moved to Mt. Tambourine, Queensland, to fully concentrate on restoring his health and well-being.

In 2005 Swanee was contacted by producer Mark Moffatt to send some vocal tracks for songs he had written in Nashville. The songs were sent back and forth on the internet, with Swanee sending some of his own songs to Mark: “I started off singing with an acoustic guitar and sending the songs to Mark. It was initially going to be an acoustic album but then it started to rock a bit too much as we settled into that Nashville groove.”

The result of this process was the album “Have A Little Faith”. Released in 2007 and under the name “John Swan”, the album was recorded with Nashville’s finest musicians who have played for Garth Brooks, John Fogerty, Shania Twain, Dolly Parton, Billy Joel, and many other top acts. The album is a reflection of his past troubles and his love for the Blues.

In 2009 Swanee worked with fellow artists Ray Burgess, Tommy Emmanuel, John St Peters and Marty Rhone on the single “Legends Of The Southern Land”. The rock anthem was written by John St Peeters and Michael Yule to unite all Australians and to celebrate those who have made contributions to the Nation’s greatness.

In 2014 Swanee released the album “One Day At A Time“, an entirely original work in collaboration with Darren Mullan from the Adelaide Recording Studio and Tony Minniecon on the song “Rescue Me”.

In 2017 Swanee was recognized for his work with various charitable organizations with the Order of Australia Medal (OAM). Later he teamed up with war veteran Rob Pickersgill to form the Warrior Music Project, which uses music to improve the lives of military veterans, police officers and first responders.

Swanee has remained one of Australia’s best-known live acts for over half a century. He still has the same devotion to creating great music as when he was a young kid in Elizabeth, and continues recording and performing music for audiences across Australia and abroad.

Swanee is a Blue Pie Records USA artist and available at all leading digital retailers on the planet.