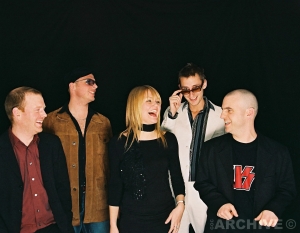 In February 2003 four old friends were reunited after five years living in various distant reaches of England.
Dan, inspired by the sublime blues licks of early Clapton, first picked up a guitar at the age of 10. He played in various bands until the age of 18 when he left to go to University, developed an obsession with dance music, learnt to mix and promoted the now legendary (at least around the Stoke area) dance night ‘Shimmee’.
It was no coincidence; Toby also picked up the bass at the age of 13 and played in the band ‘Non-Plussed’ with Dan until his College years finally beckoned. During his exile in Bradford he developed what can only be described as a perverse interest in all things Funk, Lounge and Disco.
Stuart, a classically trained percussionist, had known Toby and Dan throughout their school years. A versatile musician, with the ability to play piano, guitar and drums (and an unhealthy obsession with 80s rockers Dire Straits), he eventually moved to Warwick to train as a music teacher.
James, Stuart’s best friend, was a talented 'cellist who could turn his hand to any instrument. Despite spending five years living in Walsall, James somehow managed to retain some semblance of culture and blossomed into a wonderful pianist.
It was only when the last of the four boys had finally moved back to their old stomping ground, Forest Hill in South East London that the Sungover jigsaw began to come together. They formed a band, learnt some covers and began to entertain dangerous looking locals in some equally dangerous looking London pubs. After a particularly hairy near miss from a flying pint glass the boys decided to get a good looking girl to front the band in an effort to placate some of the more aggressive punters! In their first singer Sarah they not only found a distinctive and talented vocalist, but an unforgiving drinking partner and effective foil for the more boisterous members of the crowd. At the end of 2004 Sarah left the band to be replaced by the lovely Laura. Laura, an MA student studying music at Goldsmiths', has added a whole new and slightly smoother dimension to the bands music and exciting times are in the offing.
Sungover write their own material and it's this that has started to propel the band forward with some momentum. Already being played by radio stations up and down the country, the band's songwriting prowess cannot be questioned, but when mixed with Laura’s obvious vocal talent and melodic ear Sungover has evolved into something quite unique. The sound itself is at the same time both familiar and distinctly original but judging from the reaction of crowds around London, there is no doubting the catchy blend of pop, disco, funk and lounge will go far

Now reformed after 4 years apart, more material and dates will be announced soon.
9
What's This
Advertisement