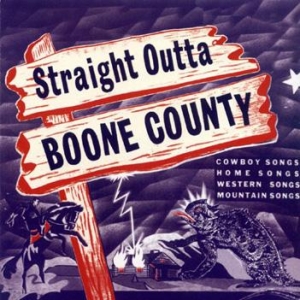 First off, a history lesson (don't give me that look, I'll make it short). The Boone County Jamboree was a staple of the airwaves in the Ohio valley in the 40's and 50's. With its powerful signal, and the fact that King Records was also located in the city, the Jamboree was the most influential proponent of hillbilly music north of Nashville. Every week, millions of listeners were exposed to the famous names like The Stanley Brothers, Merle Travis, Webb Pierce, Moon Mullican, Hawkshaw Hawkins, and Cowboy Copas, as well as no-names like Zeb Turner and J.E. Mainer.

We gathered together 20 up-and-comers to cover songs by this august group. On it, you'll hear contributions from The Volebeats, Flathead, Hazeldine, Robbie Fulks, The Lucky Stars, Slobberbone, The Grievous Angels, Sally Timms, the legendary Hardrock Gunter w/ the Dalhart Imperials, Scroat Belly, The Cowslingers, Whiskeytown, The Handsome Family, The Riptones, the Waco Brothers and more

Remakes run the range from faithful evocation to total sonic evisceration. In other words, something for everyone!! A co-release with our buddies down at Shake It records in Cincinnati.
11
What's This
Advertisement