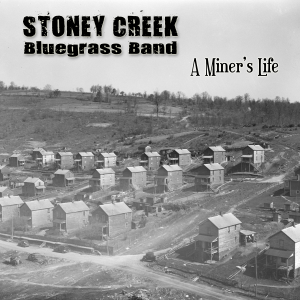 Stoney Creek Bluegrass Band has announced the June 25 release of a new studio album, "A Miner's Life". The album builds on the momentum of its title track. The latest single from the full-length album is "I Wish I Had A Lifeline," written by Mike Henderson. The song blends a Southern Gospel feel and vocal arrangement with Stoney Creek's traditional bluegrass sound. Stoney Creek's rendition includes lead vocals by Brett Smeltzer. A music video for the song is now available to accompany the radio single.

"It was inevitable -- when a group is receiving support not seen on this chart, they are bound to get to No. 1 eventually. The support for Stoney Creek Bluegrass Band has steadily increased over the 27 weeks "A Miner’s Life" has been on the chart and it pays off in it making it to No. 1," said chart operator Matt Fanton.

The song "A Miner's Life" was originally recorded by Charlie Waller and the Country Gentlemen shortly before Waller's passing in 2004. The song was written by Bill Dailey, a third-generation West Virginia coal miner. Banjo player and resonator guitarist Troy Stangle helped Dailey arrange the song in the late 1990s. Charlie Waller passed away in August 2004, shortly before his banjo-driven recording of "A Miner's Life" was released.

"I decided to redo "A Miner's Life" with Stoney Creek, more of the way Bill and I put it together, and I actually played the Dobro," Stangle said.

In January 2021, Stoney Creek returned to the recording studio to prepare a full-length album. The band chose original material and cover songs that would sit well alongside the album's title track. The album's layered production and field recordings evoke the roots of bluegrass, emphasizing the 18th and 19th century English and Scotch-Irish folk roots that still resonate in the music. The album's artwork matches the tone of music, depicting dusty coal towns in the early 1900s.

Original material on "A Miner's Life" includes "The One," "I Think I'm Gonna Love Her" and "When The Sun Goes Down," written by Kenton Catlett.

The album's cover material includes a version of "Take Me Home, Country Roads," featuring lead vocals by Libby Files. The track reaches a peak with 1,000 voices joining in for a stadium anthem ending. This large-scale choir arrangement recalls the crowd singing along with the classic song at Mountaineer Field in Morgantown, W.Va., often cited as one of the loudest stadiums in college sports.

Files also revisits "There Is A Time," a classic performed by the Dillards (as the Darlings) on the Andy Griffith Show. Like the title track, "There Is A Time" also includes a haunting melody, recalling English folk ballads (albeit with an authentic Appalachian flavor).

Another highlight of the album is the instrumental tune "Somewheres In West Virginia," composed by the late Andy Boarman. Based in Stoney Creek's hometown of Hedgesville, W.Va., Boarman was a renowned banjo and autoharp player, and instrument luthier. Bluegrass Unlimited called Boarman "the guru of the 5-string banjo" in 1978. "Somewheres In West Virginia" features the ragtime and classic banjo stylings that Boarman learned from his uncle C.C. Stump in the 1920s.

"A Miner's Life" will be available through all major online digital music services on June 25. Physical copies may be purchased directly from the band's website, www.stoneycreekbluegrass.net, which also includes links to retailers and digital outlets. The entire album is available to radio broadcasters through AirPlay Direct.

< Go Back
40
What's This
Advertisement