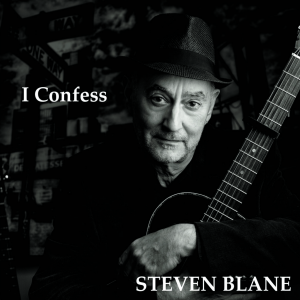 On December 11th 2016, Steven Blane released his Nashville recorded album, "I Confess." He also turned 60. It's an interesting story.
As a young boy in Jersey City, his grandma stood him on a table at a Knights of Pythias Talent Show. Singing “Delilah,” Tom Jones style, in front of a supportive audience left a profound effect on Steven.
Years later, when college was over, he plotted his escape to NYC. Once there, he was cast in a Broadway Show as a guitar playing gypsy. He lived on 8th Street in the Village in NYC and played gigs at lots of bars. He also wrote an Off-Off Broadway Rock Opera and had one of his songs performed on the original Star Search. He decided to ply his trade as a singer-songwriter and move to Nashville.
So he loaded up his blue VW bug (which was missing pieces of flooring) and headed down the road. 100 miles later he turned around, went back to NYC, struggled as an artist for a few more years, then married the love of his life and became an audio-book producer.
He also became a Cantor and a Rabbi. Steven is once again pursuing his passion as a singer-songwriter. He writes and performs in the Americana genre and his songs and lyrics reflect his musings on relationships, faith, love and fantasy.
Steven plays guitar, piano and ukulele and performs as a solo artist or with a band.
www.StevenBlane.com
steven@stevenblane.com
917-407-0477
1
What's This
Advertisement