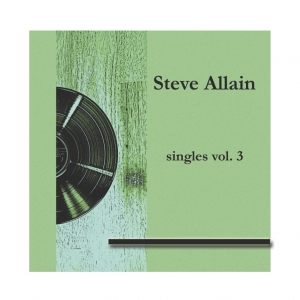 Join Steve over the course of the next 12 months, as he releases brand new and much anticipated singles, two by two -

About the project:
Inspiration behind the project:
"I am a true DIY(do-it-yourself) artist. I released an all original, full-length album titled thirteen, in 2011. Artists who have written, revised, rewritten, arranged, recorded, helped with the mixing process, designed packaging, sent off for duplication, promoted, and released an album, know how time consuming the process is. Even though this can take an incredible amount of time and money out of pocket, it is a labor of love and I never felt like it was "work".

The process feels like you are climbing a mountain, and when you reach the top, it's all over quite suddenly. What I have decided to do this time around is to release "singles"; two at a time. It's kind of like the old days of A-side, B-side records. I released two singles in December of last year and now I am releasing the next two, hence vol. 2. I will continue to release two at a time over the next year or so until I've reach 10 songs. This way I can put more thought into each release, and put out only the best material. By doing this, I can enjoy each stage of the mountain for a little longer. "-SA


About Steve:
Born about a half an hour west of Boston, Massachusetts, in the city of Marlborough, to French-Canadian parents, Steve Allain was raised on country music and Elvis Presley records. He always daydreamed about playing in a band. When Steve was nine, his family returned to New Brunswick, Canada. Family get togethers with uncles, aunts, and cousins gave him his first experiences with live music. Although many relatives played instruments, it would be nine more years before Steve bought his first guitar. By this time, he had been exposed to Jimi Hendrix, Stevie Ray Vaughan, Pink Floyd and The Beatles.

In the years to follow, Steve spent most of his free time immersed in music. Listening to everything that he could get his hands on and playing guitar sparked an interest in writing and performing music. He eventually graduated from The Musicians Institute in Hollywood, California, and later received a Bachelor’s and a Master’s degree in music. These years really helped to shape the musician/composer/songwriter that he has become. Not limited to playing in rock bands and jazz quartets, Steve also composed for classical and experimental ensembles. This melting pot of styles has and continues to shape his musical approach.