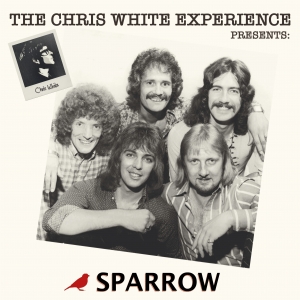 "Music and songs are the bookmarks in all our lives. It’s the language that binds us all together." - Chris White, Rock and Roll Hall of Fame induction speech - March 29th, 2019.

Sparrow are a close harmony band. Consisting of members:


In 1975 they were watched by millions on TV as repeat winners of the talent show New Faces, were signed to Bronze Records and went into CBS Studios London to record their debut album. The sessions were produced by Chris White from The Zombies, arranged by Mike Moran, and engineered by Mike Ross.

Despite the release of two singles, the album was unceremoniously shelved and the band dropped from the label without explanation. It has remained unheard until now. Chris White, in conjunction with Sparrow, has restored and mastered the album to finally be able to present this wonderful record. 15 beautifully recorded and performed tracks.

White's music career spans more than 50 years. He came to prominence in the mid 1960s as the bass guitarist and occasional lead vocalist of the English rock band The Zombies. White is one of the main composers of the Zombies' music, and made major lyrical contributions to the band's songs. He was inducted into the Rock and Roll Hall of Fame in 2019.

He became one of the band's two main songwriters, alongside Rod Argent, penning hits ('I Love You' for People) and a song now considered a standard ('This Will Be Our Year') during their initial existence. He also wrote seven of the twelve songs on the band's album and generally acknowledged masterpiece, Odessey and Oracle. White also contributed lead vocals to "Butcher's Tale (Western Front 1914)" and a verse of "Brief Candles".

Following the demise of the Zombies, White contributed songwriting and production work to Colin Blunstone's solo career and Rod Argent's new band, Argent. With Argent he wrote their 1972 hit "Hold Your Head Up".
2
What's This
Advertisement