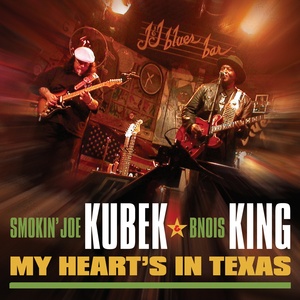 Despite fifteen years of incendiary shows and nearly nonstop touring, Joe Kubek and Bnois King's tenth release is, amazingly, their first live recording. "My Heart's In Texas," issued on CD and DVD, documents a blazing New Year's Eve set at the legendary J&J Blues Bar in Ft. Worth, Texas. The holiday cheer and roadhouse ambiance make for a uniquely satisfying taste of Joe and Bnois' trademark Texas blues.

There's no question why they gave Joe Kubek the nickname "Smokin'." He's one of the hottest electric guitar players on the blues scene today. Kubek has the technique and the chops to burn up any stage and has been doing so since the 1970's when he began frequenting the Dallas bar scene, playing with Stevie Ray Vaughan and people like the three Kings, B. B., Albert and Freddie. He settled into playing rhythm guitar behind Freddie King for a while, until King's death in December 1976.

Kubek didn't hit his stride, however, until he teamed up with jazz guitarist and singer Bnois King (no relation to Freddie) of Monroe, Louisiana, in 1989. This union began during a regular Monday-night gig in Dallas when Kubek invited King to sit in and found that King's softer, jazz-based guitar and vocals perfectly complemented Kubek's headier rock-inspired guitar work. The combination just clicked, resulting in a tasteful blending of differing styles with satisfying, fiery results.

The two formed a band and have been playing, touring, and recording together ever since. "We've pretty much been on the road since the first album came out -- we go home for a minute and get back out on the road again," Kubek says. "We've been traveling steady for a little over fifteen years now... but I count my blessings. A lot of people can't do this. It's rough sometimes but it's a neat thing to be able to do."

Joe and Bnois are a study in opposites. The two come from differing musical backgrounds - Kubek was raised on sweaty Texas blues while King has a love for jazz and R&B. Kubek explodes on stage with a blazing blues/rock style born from the guitar traditions of Texas. King finesses fat chords with a hollow body Gibson and belts out blues with his whisper-to-growl voice, his sound rooted in the jazz tradition of Louisiana.

Together, they form a musically intuitive partnership, complementing each other in a dynamic musical tour de force. Blues Revue has stated, "King's jazzy guitar work is the perfect foil to Kubek's more incendiary style. They are simply the best guitar tandem on the scene today." Guitar One magazine observed, "King's jazzman style and soulful vocals have proved the perfect complement to Kubek's full-bore guitar attack and fat, natural tone."

Over the years the band has compiled a prolific discography, finding time in their busy touring schedule to record seven albums for Bullseye Blues before signing with Blind Pig in 2002. As Joe remarked, "Blind Pig gave Bnois and me a great deal of creative freedom to make the recording we wanted to make. The label also gave me the opportunity to produce the sessions. That's something I wanted to do for a while. We had a great time."

The resulting album was "Roadhouse Research," released in February of 2003. Billboard praised the CD, saying, "Kubek demonstrates, yet again that he remains one of the most distinctive electric guitarists currently plugged-in. His fiery, agile lead guitar is complemented by King's adroit rhythm guitar and vocals." Downbeat offered this compliment, "What these road-tested Texans have learned about using guitar-driven blues-rock to please roadhouse revelers carries over into the studio." Blues Revue added their own kudos by commenting, "Roadhouse Research lives up to the high standards Kubek and King set on previous outings. Kubek's big-as-Texas lead guitar and King's jazz-laced rhythm guitar and hearty vocals are still a great combination."

Their second Blind Pig CD, "Show Me The Money," demonstrated even more all-around artistic growth by these veterans. But Kubek's flame-throwing guitar work tempered by the finesse of King's accompaniment and smooth vocals remain the bedrock of a powerful, irresistible combination. Or, as the Minneapolis Star-Tribune put it, "a rare blend of hot guitars and cool savvy, that does, indeed, smoke."

At each gig from Alaska to Alabama, the crowd is appreciative of what it hears, much in the same way Kubek thinks his onetime boss, Freddie King, probably would be. "I think he'd dig what we're doing. I really think he would. I was 19 when I played with him, and it was right before he died. He was usually a pretty quiet guy until he hit the stage -- never said much to us. But one time, he told me, `As long as you feel your music the people's gonna feel it too.' That one's really stuck with me. And you know, I bet it will forever."