Upside Down & Under My Heart 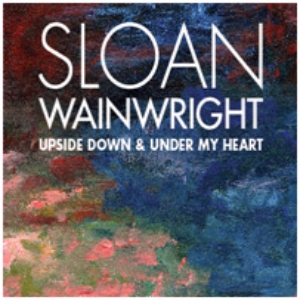 About the CD:
Upside Down & Under My Heart is Sloan Wainwrightʼs stunning afﬁrmation of love, at once intensely personal and undeniably universal. These are the songs of a wise woman who has drawn essential truths from her experience and shares them with vigor and grace and joy. Here is an album full of gifts for the listener: compelling lyrics, melodies that pull you close, and the embrace of Sloanʼs extraordinary contralto. In a world that sometimes feels upside down, Sloan Wainwright opens her heart and touches yours.

Her family tree (brother and folk-music luminary Loudon Wainwright, sister-in-law Kate McGarrigle, nephew Rufus Wainwright, nieces Martha Wainwright and Lucy Wainwright Roche) reads like a who’s who of contemporary folk music. Sloan’s incredible gift is not only her unique songwriting ability but her dramatically voiced rendition of her original songs.

“She’s folk-influenced, obviously (you can’t grow up in the First Family of Folk and not be, one imagines), but the real star here is her voice. Warm and smoky and smooth, it makes her earthy, ominous lyrics seem all the more intense.”

Defying standard categorization, singer/songwriter Sloan Wainwright consistently demonstrates her easy command of a variety of American musical styles — pop, folk, jazz and blues — held together by the melodious tone of her rich contralto. The end result, a unique and soulful hybrid.

With a solid and impressive discography of 8 original CD releases to her credit, Sloan continues to write, sing and perform live.

In addition, Sloan has written numerous musical compositions for theater and dance and teaches at many of the best-known master songwriter series and workshops. Sloan’s open spirit and first-hand experience is welcome –year after year– in the musical classrooms of such prestigious song camps as The Swannanoa Gathering, Summersongs, Wintersongs, WUMB Radio’s Summer Acoustic Music Week (SAMW) and Lamb’s Retreat.

Sloan is an independent artist making grown-up girl music in the truest sense.

“Celebrating a new album, Upside Down & Under My Heart, Wainwright is always a pleasure to behold live. The way her voice rumbles like thunder on a mountaintop will make you a believer. ” The Boston Globe

“…one of those singers whose performance is a force of nature.” Sing Out Magazine

” …earth mother voice that she pours into unexpectedly sensitive blends of folk, jazz, blues and funk.” The New York Times