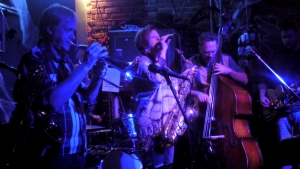 Shirley Jackson & Her Good Rockin’ Daddys have been fuelling the dance floor and festival stages with a mix of horn-powered east coast blues. The seven piece Good Rockin’ Daddys hail to a sound inspired by the early years of Rock & Roll when horn sections were an integral part of the sound of swing and a rockin’ good time.

A summer tour laid the ground work for their third cd release, ‘When The Money’s All Gone’; a collection thirteen tracks and seven which are Jackson originals ranging from bluesy ballads to raunchy guitar features and soulful horns.

The positive chemistry between the musicians comes through in their performance and their music and is as genuine as the musicians themselves. ‘When The Money’s All Gone’ is a true representation of the band’s live performance.

Whatever the line-up, Shirley Jackson been leading the Good Rockin’ Daddys into a sound that is reminiscent of the times of the honking and screaming saxophones of swinging dance clubs but stylized by her own song writing and arranging.