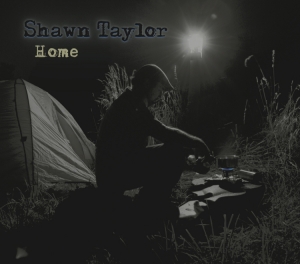 Taylor’s 3rd original song collection, “Home,” blends Americana sounds and perspectives through the deeply personal (yet widely universal) stories of a cast of 21st century characters. It runs from solo guitar tracks with thumping thumb, dancing fingers and wailing harp; to economical band tracks with cello, steel slide guitar, Telecaster, bass, percussion, and layered harmonies.
The songs’ characters are a slice of this decade’s American pie. Corrupt bankers and politicians. A pregnant woman awaiting her love’s return. A soldier saying good-bye. There are those who’ve lost their homes on paper, and those who’ve lost them in their hearts. And then there are those just glad to have each other, and those content to sit with good company and a cup of coffee, to laugh at their own foolishness. And all these characters are connected by the underlying theme of the ephemeral nature of ‘home.’
“Shawn is a masterful balladeer and troubador,” says Remo Ricaldone of American Roots Radio in Italy. “The real deal,” says Jim Dubinski of WUVT, Va.