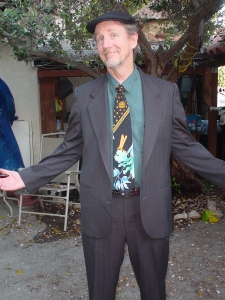 Severin Browne is a singer-songwriter with many years of performing and recording experience. In the early 1970’s Berry Gordy signed Severin to a staff songwriting position with Motown’s publishing company Jobete Music just as Motown was moving to Hollywood. Six months later Severin signed on with Motown Records as an artist and, over the next few years, recorded two LPs.

In 1996 Severin released a third album on the Moo Records label titled "From the Edge of the World." Some of these songs were used in the indie film "Plan B" starring Jon Cryer. Also during this period, Severin co-wrote a couple songs for the American video release of the Japanese classic “My Friend Totoro” for 20th Century Fox. Then a few years later Severin self-released his 4th CD, “This Twisted Road”, produced with Edward Tree.

After ten years of gigs, new songs, and teaching, Severin has finally released a new collection of songs.

“Lucky Man – A Songwriter’s Notebook” is a collection of 13 songs written by Severin and an assortment of co-writers that highlights the love of songwriting that Severin lives by and tries to instill in his students. Though these thirteen songs do not stick to the same musical genre, Severin maintains that his love of songwriting is the common factor - the glue that holds it all together.

Severin now teaches guitar and songwriting at Old Town Music in Pasadena and at SummerSongs, the summer and winter camps for songwriters in Cambria, California. For more information see www.severinbrowne.com and www.summersongs.com.
5
What's This
Advertisement