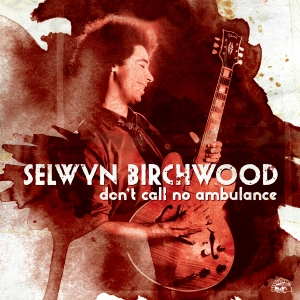 Selwyn Birchwood, Florida's rising young blues fireball, is a guitar and lap steel playing bundle of pure energy. He delivers his original songs with a revival tent preacher's fervor and a natural storyteller's charisma made all the more impactful by his raw, unvarnished vocals. Birchwood plays high-octane blues-at once deeply rooted, funky and up-to-the-minute-with true passion and honest emotion. With his band feeding off his drive and exuberance, the striking 6'3" 29-year-old with his trademark Afro roams the stage (often barefoot), ripping out memorable guitar licks with ease. His ability to win over an audience,any audience, is proven night after night on the bandstand. With his warm, magnetic personality, Birchwood is as down-to-earth as his music is fun, thought-provoking and vital. His mission is to spread his music far and wide, to share his joy, to play his heart out, and to push the blues into the future. "There's nothing I'd rather be doing than playing the blues," he says. "And I try to convey that with every song and with every performance."

In 2013, Birchwood catapulted from local hero to shooting star. He won the world-renowned International Blues Challenge, beating out 125 other bands from the U.S. and abroad. He also took home the Albert King Guitarist Of The Year Award. It wasn't long before Alligator Records president Bruce Iglauer offered Birchwood a contract. His debut album, Don't Call No Ambulance, is a fully realized vision of contemporary blues. Birchwood's original songs range from raucous romps to hill country stomps, from searing, serious slow blues to modern blues rock. Between his uninhibited sense of fun and adventure and his serious-as-a-heart-attack musicianship, Don't Call No Ambulance is a window into the future of the blues. "All originals and no filler," he says of the album. "It's that genuineness of emotion in the songs that people can hear."


The Tampa Tribune says Birchwood plays with "power and precision reminiscent of blues guitar hero Buddy Guy. He is a gritty vocalist [who is] commanding with his axe." According to Iglauer, Birchwood is the real deal. "Selwyn Birchwood is a terrific young blues talent with a huge future. He writes smart, infectious, fresh songs and delivers them with a warm, conversational vocal style and a fun-loving attitude. He's a killer guitarist, switching between a regular six-string and lap steel. Live, he's a ball of energy, interacting with the audience like they were in his living room. Selwyn is destined to be one of the next stars in the blues world."

Birchwood, his father from Tobago, his mother from the UK, was born in 1985 in Orlando, Florida. He first grabbed a guitar at age 13 and soon became proficient at mimicking what he heard on the radio. But the popular grunge rock, hip-hop and metal of the 1990s didn’t move him, and he quickly grew bored. And then he heard Jimi Hendrix. "He was larger than life. What he did was mind-blowing. When I realized Hendrix was influenced by the blues, I found my path," he says. By 17, he was deep into the blues, listening to Albert King, Freddie King, Albert Collins, Muddy Waters, Lightnin' Hopkins and especially Buddy Guy. As luck would have it, just as Birchwood was discovering Guy, the blues master had a concert scheduled in Orlando. Birchwood was there, front and center. "I was floored," he recalls. "I completely connected with the blues. I knew I had to make this music."


As Selwyn's guitar proficiency grew, a friend told him that his neighbor was a blues guitarist and had a band. The 19-year-old Selwyn went over to check it out and jam. The guitar-playing neighbor turned out to be the Texas-born blues legend Sonny Rhodes, who was instantly impressed with the enthusiastic young guitar slinger. Within one month's time, Rhodes asked Birchwood to pack his bags and join him on the road. It was an incredible experience for Birchwood, as Rhodes took the youngster under his wing, not only teaching him guitar and lap steel, but also how to conduct business, how to run a band, and how to reach an audience. "Sonny always said, 'Play what's in your heart.' I've never lost sight of that," says Birchwood.

Rhodes insisted Birchwood go to college and always held the guitar spot in his band open for Selwyn whenever he was available. It was a win-win situation, as Birchwood—through hard work and scholarships—received his MBA from The University of Tampa. "I challenged myself to get that degree," Birchwood says. "These days, it's not good enough to just be a good player." Combining the musical lessons learned from Rhodes and his business acumen, Birchwood, now living in Tampa, formed the current version of The Selwyn Birchwood Band in 2010. The band, with the same members still together today, features veteran musicians older than Selwyn, testifying to Selwyn's musical chops and his leadership skills. On stage, they play off each other with ease, feeding each other energy, sharing the fun with the audience.

In 2011 the self-released FL Boy helped the band land gigs outside of their Tampa home, where they were becoming local heroes. Birchwood and his band won their way to spots at the 2012 and 2013 International Blues Challenges in Memphis. After taking ninth place in 2012, they came back determined the next year, taking first place. Alligator Records president Bruce Iglauer was sitting at the judges' table at the time. "I saw Selwyn's potential in 2012. He absolutely deserved to win in 2013," he says. The victory opened more doors for Birchwood, increased his exposure and helped the band land a deal with Intrepid Artists booking agency, which led to more and better gigs.

The Selwyn Birchwood Band has been touring non-stop since winning the IBC. The band has performed at festivals including The Mississippi Valley Blues Festival, Springing The Blues Festival, The Tampa Bay Blues Festival, The North Atlantic Blues Festival, The King Biscuit Blues Festival as well as on The Legendary Rhythm & Blues Cruise. Birchwood has opened for major blues stars including Robert Cray and Buddy Guy and has shared the stage with another friend and teacher, Joe Louis Walker (who guests on Don't Call No Ambulance's "The River Turned Red"). He recently had the opportunity, when performing in San Francisco, to bring his friend and mentor Sonny Rhodes on stage to sit in with his band. It was a moment Birchwood will never forget. "He did so much for me; it was a real honor to return the favor, if only a little."

With Don't Call No Ambulance, Selwyn Birchwood steps onto the world stage, bringing a new wave of blues to a new generation of blues fans. "If I can play my music, travel the world, bring happiness to people, then I'm blessed and happy," he says. "It's like Sonny always told me, 'If you follow your heart, you’ll always get what you want.'"

Picture this—It’s the early 2000’s, and kids fill the parking lot of a Florida high school. Their car radios blast whatever is new and popular from sugary pop to hip-hop. Then a teenage Selwyn Birchwood pulls up, windows down, and Muddy Waters spills out. His friends make faces and ask him, bewildered, “What is that?” Even then, Selwyn wasn’t afraid to be different. But he’s always done things a little differently from everyone else. At 29 years old and based in Tampa, he doesn’t fit the stereotype of a typical bluesman. He may be young, but he’s got experience, grit, and authenticity. He’s brimming with youthful energy and enthusiasm, but he’s also serious about his craft, wise beyond his years, and already has a decade tearing up stages under his belt.

So where did this guy—bursting onto the blues scene, making waves and defying expectations—come from?

Selwyn was born in Orlando, Florida and raised by his mother. She encouraged his creativity, but music—particularly the blues—was something he had to seek out on his own. He began playing the guitar when he was 12, and after growing tired of mainstream fare on the radio, he went looking for something different. At age 17, he found Jimi Hendrix. Hendrix was unlike anything he had ever heard. “I became adamant about finding out where he got those ideas and sounds,” Selwyn remembers. He delved into Hendrix’s background and one of the names he stumbled on was Buddy Guy, who happened to be playing in his town. Selwyn walked blindly into the show, not knowing what to expect. Buddy’s music struck him like a lightning bolt; “Just to hear someone sing and play with that much raw emotion...it affected me so greatly. Three days afterwards I’d still wake up in the morning and be like, ‘Well, damn!’” Selwyn realized the blues was what he wanted to play for the rest of his life.

Then, at 19, Selwyn had a chance encounter with Texas-born veteran bluesman Sonny Rhodes. Rhodes was struck by young Selwyn’s skill and eagerness and offered him his first professional gig. Selwyn toured with Sonny off and on for four years, during his summer breaks from college. From Rhodes, Selwyn learned to channel his deep feeling for the blues into his music, and also how to survive in the business of being a touring musician. Rhodes also inspired him to pick up the lap steel guitar. Rhodes became one of Selwyn’s biggest musical influences, along with other favorites like Muddy Waters, John Lee Hooker, Lightnin’ Hopkins, and, of course, Buddy Guy.

After playing with various sidemen in Orlando, Selwyn moved to Tampa in 2011 and formed the current Selwyn Birchwood Band. Two years later, they took home the top honors at the prestigious International Blues Challenge (IBC) in Memphis, Tennessee, beating out 125 bands from all over the country. The win opened a lot of valuable doors for them. They have since established a solid, growing fan base in the Southeast, gone on a major national tour, and played festivals like the great King Biscuit Festival in Helena, Arkansas. They even headlined at Buddy Guy’s Chicago club, Legends.

Don’t Call No Ambulance captures the thrill of Selwyn’s live shows. On stage, Selwyn is spontaneous and riveting, interacting with the audience, and making you feel like he’s playing just for you. On record, he takes listeners for the same kind of ride, embracing an eclectic mix of sounds and styles: ballads, traditional blues, funk and rootsy, swampy rock. His band has a unique configuration: electric and lap steel guitar, drums, bass and baritone sax, plus Selwyn’s voice, a voice that could stand up to the greats. He features his sax player, Regi Oliver, heavily throughout the record. He loves to let his band shine: “I know it’s me on the front of the album, but I like to showcase my guys as much as I can.”

All of the songs on the record are steeped in personal meaning. “It’s hard for me to write a song unless I feel it has some real substance to it.” His subject matter veers from dancing and partying to heavier topics like lost love and suicide. He doesn’t like to think of any of the material as dark, just thought-provoking. Selwyn embraces the classic blues spirit, but interprets blues through a modern lens. He recalls the greats of the past, but with a style that is fresh, exciting, and all his own. That’s what makes him worth getting to know, and what makes him so important to the genre. Soon everyone will know the Selwyn Birchwood story. Just remember you read it here first.