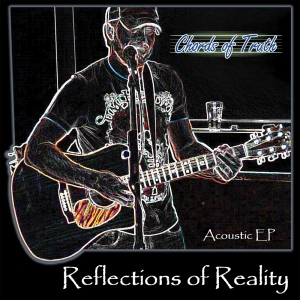 Chords of Truth is a solo acoustic project by Folk Singer-Songwriter Jason Garriotte. Jason is originally from a small town in Indiana, but now lives in South Carolina. In September of 2011, inspiration struck for Jason with a symphony of melodies and lyrics that would soon emerge as his debut EP “Reflections of Reality”. The framework for these songs was born out of over 10 years of playing his unique cover versions of classic songs. The dynamic blend of folk and rockabilly-styled acoustic guitar with bass vocals that are both tender yet masculine creates an innovative sound and listening experience.

Working with producer Jeffrey Joslin, they created an album that sends you on an intoxicating mind trip of self reflection with a driving acoustic guitar soundtrack implementing harmonies, piano and fingerpicking styles to bring the story home. “Tune Your Mind”, Chords of Truth’s first track on the album paints the perfect picture of how one should use their mind to reflect on what we want and to be clear in making it a reality. Jason says, “My goal is to create music that helps change the way people look at the world around them and to see things in a new light. All while enjoying the ride.”

Chords of Truth influences include classic artists like Bob Dylan, Simon and Garfunkel, Leonard Cohen and Cat Stevens. With a unique sound that has been compared to recent hit artists like Jack Johnson, Mumford & Sons, Iron & Wine, and Ray Lamontagne.

When not in the studio, Jason has been putting his dues in on the road, already touring a variety of cities throughout the United States. This year will prove to be busy with this exciting new album release “Reflections of Reality”. Jason will be spending the year on tour playing countless shows and promoting the album.
5
What's This
Advertisement