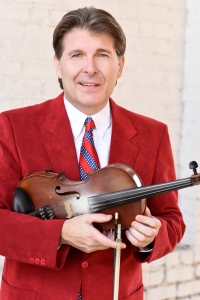 Appalachian Ambassador of the Fiddle

Male Vocalist of the Year

Songwriter of the Year

"No matter where you recognize Randall Franks from, he is a man known for quality work and giving his absolute best to everything that he does." Southern Gospel Music Radio


Randall Franks Artist Page features recordings from throughout the career of 1994 Male Vocalist of the Year (Country) and Appalachian Ambassador of the Fiddle Randall Franks, best known as "Officer Randy Goode" from TV's "In the Heat of the Night." He began a long association guest starring as an artist for the Grand Ole Opry ® in 1984, in addition to appearing with two of its greatest acts - Bill Monroe and his Blue Grass Boys and Jim & Jesse and the Virginia Boys. His talents have contributed to the musical legacies of of over 30 Country, Bluegrass and Gospel music hall of famers such as Jimmy Martin, Josh Graves, Chubby Wise, Mac Wiseman, Doug Dillard, Ralph Stanley, The Lewis Family, Little Jimmy Dickens, Kitty Wells, Pee Wee King, Dottie Rambo, The Marksmen Quartet, Jeff & Sheri Easter, Doodle and the Golden River Grass, and numerous others. He is a multiple music hall of fame inductee himself including the Independent Country Music Hall of Fame and the Atlanta Country Music Hall of Fame. He serves annually as the Celebrity Host of America's Grand Master Fiddler Championship at the Country Music Hall of Fame and Museum stepping in the shoes of Roy Acuff and Porter Wagoner. The Randall Franks Fiddle Trophy is awarded annually at the 1890s Day Jamboree Fiddler Convention in Ringgold, Ga. in his honor.

Click here to go to Randall Franks Christmas release, the #1 October 2019 Global Christmas Album, In the Heat of the Night Christmas Time's A Comin'

For this project the International Bluegrass Music Hall of Fame Legend Randall Franks brought together the youth, who are primarily from Georgia, Tennessee and North Carolina, to perform 18 new songs, covers and standards in Americana, Bluegrass and Southern Gospel. This charity project raises funds for the Pearl and Floyd Franks Scholarship.

Back up and Push - Randall Franks with Hall of Famer Bill Monroe and his Blue Grass Boys (02:51)

This previously unreleased recording is from "Randall Franks: 30 Years on Radio and TV Volume II" and is a Live Performance by Bill Monroe and the Blue Grass Boys at Jane Addams Auditorium in Seattle, Washington on Nov. 1, 1984.

Randall Franks was hired by Monroe, following the departure of fiddler Kenny Baker. Franks had began appearing with the group as a guest fiddler during Baker's tenure. He appeared as a Blue Grass Boy in 1984 and 1985 playing both fiddle and bass and subsequently returned as a guest fiddler throughout the remainder of Monroe's performance career.


"Keep 'Em Smilin'" is a live gospel and comedy CD featuring Randall Franks supported by former Stamps and Gold City Quartet pianist Curtis Broadway recorded at the Walker County Civic Center in Rock Spring, Ga. The project includes 11 recordings including comedy and music. Check out "In the Garden," "Cousin Viola and the Sanctified Grape Juice," and "Chicken Addiction" on this page from this CD.

"This CD really shares the Spirit and spontaneity that envelopes music makers during a special night of music and laughter in front of an amazing gathering of Southern gospel music fans." Randall Franks


Randall Franks enlisted long acclaimed Rounder/Rebel recording artist David Davis to add the tenor and mandolin parts to the duets as he carried the guitar and most of the lead vocals. Long-time Warrior River Boy Marty Hays also contributes with his bass work and a couple of baritone vocals.

Franks wrote or co-wrote many of the selections while pulling out some of his favorite standards which added to the duet collection.

He invited three of his mentors who reached their stardom during the era when brother duets were soaring to join him on the recording, the late Cotton and Jane Carrier of the WSB Barndance and the late Country and Western music and film pioneer and actor Ramblin' "Doc" Tommy Scott.

This song is from Randall's Appalachian brother duet collection "God's Children" with Bluegrass star David Davis of Rounder Records and bass player Marty Hays, both of the Warrior River Boys.

"This song takes incidents I've seen while serving and from the daily news and place them within the context of the redeeming truth that there is more to life than what fills our vision and our screens to fill our souls with sadness, worry and pain. Life has so much more for us and God puts them in front of us every day to uplift and encourage." Randall Franks