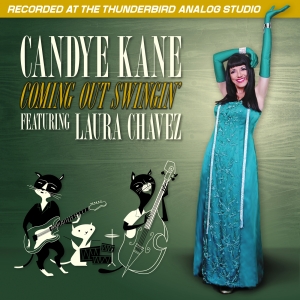 Candye Kane believes the universe makes no mistakes. The universe has already strengthened you for the most radical endurance race of all…LIFE.
In 1983, Candye was a teenage mom from the poor side of Los Angeles. It was welfare and food stamps by day, hard drug use and nude modeling by night, while at the same time yodeling and moshing alongside groundbreaking punk bands like the Circle Jerks, X and FEAR in Hollywood’s underground music scene. To help pay the bills she appeared on the covers of Hustler and High Society, whilst peddling her cassettes of original hillbilly music to anyone who would listen along the Venice, CA Boardwalk.
Candye signed a management deal with The Halsey Agency, the first agency to promote American music behind the Iron Curtain. She became close friends with Dave Alvin, Marty Stuart and Dwight Yoakum who wisely encouraged her to always be honest about her colorful past. Candye went on to record twelve CD’s on labels including Sire and Rounder Records. She built a worldwide reputation by touring 250 days a year, wrote songs that appeared on television and in movies, landed TV appearances and collaborated with numerous artists. She also penned and performed a stage play about her life called “The Toughest Girl Alive” to sold out audiences and at the New York Fringe Festival. Candye has been nominated for five National Blues Awards and has won the Best Blues Band Award in her adopted hometown of San Diego, CA a record nine consecutive times, all while raising two sons to adulthood.
Sue Foley introduced Candye to fellow guitarist Laura Chavez in 2007. Musical kindred spirits, Kane and Chavez were excited to start writing songs together and get out on the road, but the pesky universe had plans of its own. Candye hadn’t been feeling great, and after an especially rough pain bout she went to an ER in Germany, where the doctor on call saw a mass on her pancreas. As she looked up the cancer she had, she realized her odds of surviving were poor, and Candye told Laura she needed to find another band and get famous. But Laura insisted on waiting until Candye had her first surgery. A bright student who once considered med school, Chavez actually enjoyed researching Candye’s rare type of neuroendocrine cancer and advocated for her in and out of the hospital. As Candye started to feel better, the two celebrated by writing and recording two new CD’s and jumped in the Chevy van and hit the road. In May 2012 the cancer came back and a second surgery was performed. As soon as they could, the road warriors Kane and Chavez continued their hectic schedule around the world – from Finland to Australia to Europe and Africa. In spite of monthly injections to keep the cancer at bay, they show no signs of slowing down.
Coming Out Swingin’ is Kane and Chavez’s third CD together, featuring thirteen songs, nine of them self-penned as a team. Onstage and recording, their partnership is legendary today. Laura’s versatile, tasty playing and killer tone shines throughout, and Kane is her no-holds-barred self – telling heart wrenching stories of pain and survival, lust and heartbreak. Still the sexual dynamo she was in the 80s, she now does it as a petite size 8 but has lost none of the barrelhouse belting that made her a Bessie Smith contender. It’s as if cancer has strengthened both of these women, turning them into one powerhouse of guts and determination and one dynamic duo to be encountered, on and off the bandstand. Coming out Swingin’ – indeed!