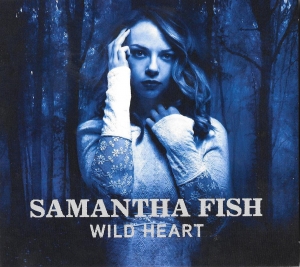 Samantha Fish Spins You Around With An Emotional Wild Heart

“She snarls it, she spits it out and she could give a damn.” - Goldmine

Produced by Luther Dickinson
Out on July 10th on Ruf Records


3rd Studio Release is filled up to the rim with staggering vocals,
Aching guitar riffs and thunderous drums, leaving you lifeless

Wild Heart was recorded in three different studios, as they trekked the backroads from Louisiana to Mississippi in the fall of 2014. Starting at Brady Blade’s Shreveport, Louisiana studio, they laid the basic rhythm tracks and vocals. Luther and Samantha then hightailed it to his Zebra Ranch Studios in Hernando, Mississippi where they had a traditional Hill Country Blues session. Then, finally, all roads lead to Memphis where the duo put the final touches at both Willie Mitchell’s Royal Studios and the legendary Ardent studios.

Growing up in Kansas City in a musical family, Samantha’s first instrument was the drums before she switched to guitar. As she listened to her musical heroes, Fish began to explore their own influences by going back in time. After the sun went down she would visit clubs like Knuckleheads to soak it all in. “They had all kinds of artists come through the doors,” she says. “I really got into listening to the live performances, and that’s just where it rubbed off on me. When you see something right in front of you, that’s where the impact happens.” (Vox Magazine 2014) Over the years, she’s cultivated her own sound by blending her influences ranging from Tom Petty, Sheryl Crow, R.L. Burnside and Stevie Ray Vaughan as well as her musical peers.

“I fell in love with it,” she told Premier Guitar of her growing passion for the form, “and started doing my homework by listening to the old guys like Son House and Skip James.”

Only into her mid-20s she already released two CDs, played all over the world and shared the stage with well-established to the legendary artists from Tab Benoit and Johnny Lang to Buddy Guy. Label mate and sometimes touring buddy, Mike Zito has long championed Samantha, produced her critically acclaimed albums, Runaway and Black Wind Howlin' (2013). Samantha’s had a master’s class in a wide variety of the blues. Her work ethic is unquestioned and her love for performance is obvious.

All that ambition and passion paid off in 2012 when Samantha won a Blues Music Award for Best New Artist Debut for her 2011 release Runaway (Ruf Records). The wonderful critical praise, winning fans at shows and all the long hours driving came to a shining moment that put more fuel into her fire. This desire is now revealed with Wild Heart as the pivotal moment in her budding career.

Always yearning to learn, Samantha soaked in this experience like a sponge from the songwriting sessions to the final background harmonies. As her songs came together, it was suggested for her to collaborate with another songwriter she jumped the opportunity. Last summer she traveled to Nashville and wrote with accomplished songwriter Jim McCormick, whose songs have been cut by Trisha Yearwood and Keith Urban. A native of New Orleans, Jim has a flare for blues-boogie and full throttle vocalization to haunting melodies that gave Samantha a chance to growl.

“… Fish’s commanding voice holds its own against the crunching guitar riffs and driving beat.”
-Elmore Magazine

Samantha and Jim wrote five of the 12 songs on the album, including the title song, “Wild Heart”, that echoes Led Zeppelin with a whiplash of a steady guitar riff. “Show Me” - a song that could easily be heard at some of New York City’s finest rock clubs – wreaks stale beer. Samantha holds her own on guitar duties on this tune as Brady Blade grinds the drums with a slow steady roll.

As the album opens she’s bashes away with “Road Runner“, a warning to others of this mean man that broke her heart. The driving guitar sounds and thunderous beat supports her voice that is smooth as honey with a sad dash of salt.

"Left me waiting by a red-light, I think about him every night
Road runner, road runner" – Road Runner

After wrapping basic tracks, it was off to Dickinson’s Zebra Ranch Studios via the back roads of Mississippi. Seeing the culture and environment upfront got her excited for the unknown. The result of that magical setting was a cover of Charley Patton’s, “Jim Lee Blues Pt. 1”, which fits Fish’s voice. It was an organic setting with fellow Hill Country Blues artists Sharde Thomas and longtime friend, Lightnin Malcolm. Sharde is a native Mississippian fife/drum player in the same American tradition of her grandfather Othar Turner. “This session had a whole other vibe to it. The studio is out in the country, no cell service, no distractions. You're just surrounded by nature and guitars,” beams Samantha.

Samantha’s love for the Hill Country Blues genre started early on as her musical foundation began to build. This fiery singer-songwriter and guitarist met some of these players when she attended the King Biscuit Blues Festival at age 17. There she met Lightnin Malcolm, a guitarist who befriended the young gun and then a few years later, at Zebra Ranch, she got to record with him. “Working with Malcolm was a longtime coming as I'd known him since I was a teenager. Hearing hill country blues made me fall in love with blues music and he was one of the first artists who let me jam with him.”

“One of my favorite songs on Wild Heart is ‘Go Home’. It became so powerful and we wanted girl power, no-frills and those ladies delivered,” Samantha proudly states. It’s a quiet moment of reflection of an inner self struggle that can either be destructive or productive. The background singers, Shontelle Norman-Beatty and Risse Norman provide a soothing answer to Samantha’s tearful call.
“Maybe in a moment of clarity, I’ll do what’s right,
Maybe I’ll finally swallow a bit of my own advice” – Go Home

Both Samantha and Luther wanted to make a live and honest record, capturing Fish’s emotional intensity and power trio integrity. “She is so smart and talented. It was a joy to take her under my wing and share what I've learned with her. Samantha brought her emotional energy from her performances which transcended into the record. The songs are very personal and she delivered. I am proud to be a part of the record”, states Dickinson. Samantha was equally satisfied with the results, “I was blown away by his ability to color a song. I stepped out of my comfort zone and I couldn't be more proud of what we made.”

“Fish is an inveterate storyteller as well. Her songs are vivid and compelling with thick guitar lines and catchy riffs.” – The Morning Call

As the album comes to a close, Samantha has run the gamut of emotions. Her fingers are tired and her voice is shaking but she is able to pull out one more gem of a performance. A whispering rendition of Junior Kimbrough’s “I’m In Love With You”. This is Samantha at her best-caressing the melody while the guitars and a slight drum beat flickers underneath her reassuring voice.

Samantha has dug her high heels in some rich musical soil with Wild Heart and is poised to reach a new level in her career. She is armed with her guitar and these songs are in her back pocket; for there is no doubt Miss Fish will aim and fire, with confidence.