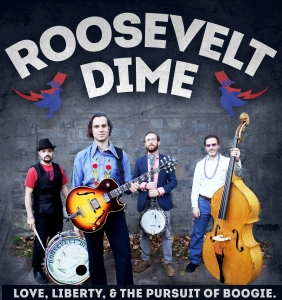 Seamlessly combining the feel-good groove of classic Rhythm and Blues with acoustic Americana instrumentation, Roosevelt Dime has crafted an infectious style and sound truly their own. Eben Pariser fronts the band with searingly soulful vocals, belted and whispered with a passion and panache straight from the juke joints. Andrew Green’s innovative piano-inspired banjo style, equal parts boogie woogie and bluegrass, lock in with the New Orleans clave rhythms of Tony Montalbano’s drums and Craig Akin’s syncopated upright bass. The swampy chords and swinging blues lines of Eben’s semi-hollow electric guitar thicken the sound further still. Armed with original songs of hope, love, and conviction that sound birthed from the cradle of American music yet still crucially relevant to the times in which we live, the group has attracted rowdy revelers on the streets of NYC, captivated serious listeners in quiet clubs, and moved ecstatic dancers at the festival grounds on their current nationwide tour. Roosevelt Dime’s jubilant performances are a “perpetual crowd pleaser” (NY Times) in any setting.

Hailing from Brooklyn, New York, Roosevelt Dime got its start performing in the age old New Orleans street busking tradition, only it was the bustling avenues of the Big Apple rather than the Big Easy that first nurtured their sound. People of all ages, persuasions, creeds, and colors came together to shake their hips at these impromptu performances that were equal parts old-time jug band and Dixieland second line, and the diversity in these crowds was an essential element in the formation of the band’s style and outlook. The undeniable positivity, crowd-sourced spontaneity, and literal grassroots community-building at these revelries stuck with them as they took their joyous beat from the city’s parks and subways to seek that same heartfelt connection with audiences worldwide.

The seeds of this endeavor were first planted at Oberlin College, where Andrew and Eben cut their teeth playing in folk and blues bands amidst one of the finest music conservatories in the country. Shortly after both settling in New York, they began writing songs together and soon started working with dynamic drummer Tony Montalbano. The current quartet configuration took shape with the addition of Craig Akin on upright bass, while Eben switched from playing bass back to his first love – guitar. These moves have allowed the group to explore the full palate of American music through their own writing and arranging more deeply than ever.

From their earliest days, the group has been an Americana band in the truest sense—rather than dwell on the divisions between the elements that make up the genre, they harmoniously merge the shared and varied musical traditions into a unique sound that’s both timely and timeless. As their primary influences (Ray Charles, The Band, and John Hartford to name a few) did before, Roosevelt Dime seek to not merely combine aspects of different genres, but to challenge the notion of these differences at their core. The pedal steel infused alt-country of their debut album “Crooked Roots” (2009) was called “modern acoustic American roots music at its best” by Folkworld. The horn laden romps of “Steamboat Soul” (2011) and “Full Head of Steam” (2014), which peaked at #6 on the national folk charts, were called “a full charged lesson on how to unearth some vital roots” by The Bluegrass Situation. Their forthcoming EP is a further reflection on our diverse American heritage through critical optimism that honors our very real struggles and the joy necessary to overcome.

What the critics are saying...
“A fully charged lesson on how to unearth some vital roots”
Lee Zimmerman - The Bluegrass Situation

“The sound is a throwback to a bygone era — a celebration of acoustic Americana, folk, rock, and rhythm and blues.”
Gary Stoller - No Depression

“Roosevelt Dime offers fresh take on American roots. Evocative in some intangible way of The Band or even the Grateful Dead, Roosevelt Dime nonetheless has its own unique sound: fresh, positive and prone to induce toe-tapping.”
Kate Goldsmith - Northern Dutchess News
13
What's This
Advertisement