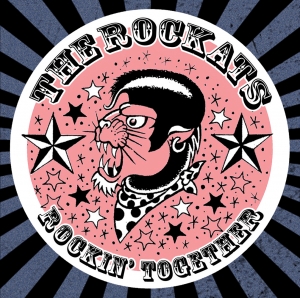 As founders of the modern Rockabilly scene, all "Cat" bands were inspired by the Rockats. Numerous appearances on network TV shows like Midnight Special, American Bandstand, Merv Griffin and a feature musical performance in the major motion picture "Where the Boys Are 84" , cemented the Rockats place in Rock N' Roll history.
Having toured with the Clash, Kiss, Iggy Pop, David Bowie, Tina Turner, Thin Lizzy and the Pretenders along with impressive achievements like being photographed by Andy Warhol, interviewed by Deborah Harry and recording the RCA hit single "Make That Move" (an early MTV favorite) have combined to make the Rockats true rock icons.
Now the rockets have reunited to record the impressive album "Rockin' Together", packed with 12 new original songs. "Rockin' Together" featuring the soulful vocals of Dibbs Preston, the innovative upright bass playing of Smutty Smith, the rebel rousing guitar work of Danny B. Harvey and Barry Ryan, and the solid backbeat of drummers Mike Osborne and Louis King. The album is recorded on warm analogue equipment that delivers a sound reminiscent of yesterday. And still more relevant today.