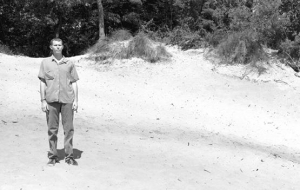 If Robbie didn't make music, he'd probably be a postal service administrator... Draw your own conclusions. Robbie plays by nobody's rules--except the ones he hears in his head; his scorn for the music industry makes ours look positively prosaic. But don't let that make you lose sight of THE SONGS.

Widely regarded by those who monitor such things as one of the most gifted songwriters to ever ply the trade, he can sing "Eggs" and "Sing a Sad Song" back to back and mean 'em both. While it is true he started off a honky tonk smartass, it quickly became evident that Robbie was a monster talent and some of the songs he's written for his Bloodshot albums have been rightly elevated to the status of "classic."

It is a damning condemnation of our world's musical taste that he has not been elevated to the ranks of the multi-faceted giants of songwriting like Nick Lowe and Dave Alvin and Harlan Howard. He damn well should be. Lost in the deserved accolades for being a fabulously unique, clever, and heartfelt writer is the fact that he's also one of the best guitarists around. The chameleon-like tall guy can whip it out in honky-tonk, country, bluegrass, power pop, or whatever strikes his ample whimsy at the time.

He has also been more than gracious by playing on songs by Anna Fermin, Sally Timms, and Kelly Hogan.

And, no, we don't take his 5th anniversary compilation song personally.
17
What's This
Advertisement