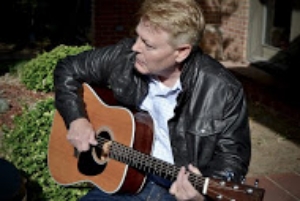 The story of Michael Rhodes does not have a definite beginning or end. It's one that is still being written, and is far from a finished product. Growing up in rural Wyoming and North Dakota, he was surrounded by a community that was incredibly supportive of local talent and helped foster his musical ability. He was active in choir and played in a high school rock band called “Freedom,” covering rock hits of the time. His innate ability to learn music by ear, and his knack for finding ways to turn even the most unassuming objects, such as a flyswatter, into musical instruments, made it clear that music was ingrained in his DNA.

But a high school rock band is not what defines who Michael Rhodes is today. After a potential music career in Nashville in the 1980’s, Michael made the shift to a family-oriented life. He now resides in Littleton, CO where, when he isn’t writing or rehearsing, he coaches youth wrestling and is an active member of his church.

Michael’s music is not defined by one sound, and he does not limit his lyrical identity to one set of topics. His sound is a medley of Americana and Nashville Country-Rock, tipping its hat to artists such as James Taylor, John Denver, The Eagles, and Garth Brooks. It’s the kind of music you want to drive down sunset-painted highway, windows down, with the breeze rolling through. It’s lighthearted, “easy listening” feel and the storytelling lyrics give it an incredibly nostalgic quality that is hard not to like.

His newest EP, After All These Years, is a deeply reflective scrapbook of Michael’s life. His gentle nature comes through, as he muses on his life story. He touches on the moments that some might find ordinary, but in how relatable they are, actually make them some of the most moving moments in one’s life. Tracks such as “The Only Song,” “Please Remember Me” and “Emily” transport you into the pages of Michael’s journal, with words that startle in their simplicity and cut to the root of the emotion. The five-song compilation consists of songs that he either wrote or co-wrote and recorded at The Spot Studios in Lakewood, CO. After All These Years is set to be released Summer 2016.

When it comes to Michael Rhodes’ music, there is no glam, no formula, and no hidden agenda. It’s music in its purest form. “It all starts with a feeling. Whether it be happy, sad, or angry. I need to feel something before I can write.” In a world where the integrity of music can often be lost or blurred by the single-minded focus of fame or acclaim, Michael’s music is refreshing in its honesty and purity. He looks forward to continuing on his musical path, thriving off the support of his family and friends, and making the most of each day. His favorite quote by George Eliot states it simply: “It’s never too late to be what you might have been.” Michael is a wonderful example of this, sharing his passion with any and all who wish to listen.
3
What's This
Advertisement