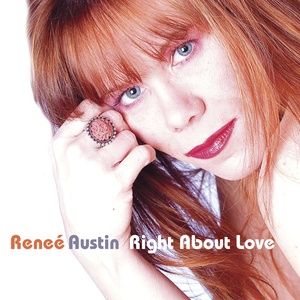 When you first hear her voice - that voice - it makes the skin on the top of your head tingle and your ears take notice that here is something - someone - very special." - Blues Wax

Singer-songwriter Reneé Austin turned quite a few heads with her 2003 national debut on Blind Pig Records, Sweet Talk. Critics marveled at her nearly five-octave range, her stunning vocal dynamism, her poignant and insightful songwriting, and her remarkable versatility, comparing her to Janis Joplin and Tina Turner. Calling the CD "an impressive grab bag of original roots music," Blues Revue said, "Her stunning vocal range grabs the listener from first song to last...The auspicious Sweet Talk is a harbinger of great things to come for this talented and soulful vocalist." With her highly-anticipated follow-up release, Right About Love, Austin validates those early raves and predictions of greatness.

Austin offers razor-sharp reinterpretations of American roots music styles and brings them to life with an arsenal of vocal twists - husky and swaggering, breathy and vulnerable, angelic and clear-as-a-bell. A multi-instrumentalist and prolific songwriter, she's been honing her craft since early childhood, and has nurtured her singing voice to astounding, operatic heights.

Although Reneé could be most broadly categorized as a blues artist, her sound has been molded by an expanse of influences, and she credits that to her early environment. Born in San Diego, California, Reneé relocated to Texas by the time she was three. Growing up in the small town of Kingsland, Reneé immersed herself in Texas' spirited musical melting pot - one that has helped shape dozens of other seminal artists from the American Southwest. "In Texas, the older, more seasoned artists garner the most respect. So, I learned early on to respect styles by musicians of all ages, makes and models - there's a tremendous reverence for tradition," says Austin.

Many critics noted this ability to sashay with ease from one style of music to the next. The Philadelphia Inquirer said Austin "embraces a deliciously wide range of roots styles: She belts the blues with sass, swings nimbly on R&B, and fires off some rousing gospel. For good measure, she also shows she can take it uptown with a sultry, soulful ballad." No Depression magazine said, "Ostensibly a blues singer, Austin is really more a genre-buster, alchemizing a variety of blues, R&B, soul and gospel styles while giving it all a country flavor." Added Hi Fi Plus, "Austin is an artist capable of covering so many musical bases and she does it all with a purr, a growl, a sexy moan and a throaty roar that constantly delights the listener."

Living Blues weighed in with, "Categories like 'blues,' 'rock,' 'soul,' or 'neo-soul' seem too restrictive for her - if anything, she's a torch singer in the Bette Midler tradition, minus the camp and with a welcome dollop of backstreet grit. As of now, she's also a gloriously radiant diamond in the rough." "Austin's tough, husky growl can be as gutsy as Tina Turner or as tender as Maria Muldaur, said All Music Guide, adding, "her presence is so powerful that she's comfortable in a variety of grooves and, at least on the basis of this album, succeeds at all of them."

Reneé has known she wanted to be a singer since the age of four, when she first performed the Andre Crouch classic, "Through It All," as a solo during a service in a tiny, hill country church. "I was too short to reach the podium, so they made me stand on a chair," laughs Austin. "That was my induction into the musical world." From then on, she never stopped - every hairbrush and curling iron became a microphone as she began putting on shows for her mom and dad in their living room. Reneé continued to sing in school and church, and, later, in college choir and cover bands. By 15, she'd written her first song and - as the numerous church groups traveling through her area gradually inspired her - it became ever more clear that she too wanted to tour, perform and record.

Austin relocated to Minneapolis to pursue a relationship with her college sweetheart. Although the relationship fell apart, her music career began pulling wholly new opportunities together. She was able to assemble a whip-smart band, and in 1997 independently released her debut CD, Dancin' With Mr. Blue, which was honored locally as Best Blues Recording by the Minnesota Music Academy (MMA). She also received additional awards for both Best Blues Artist and Best Female Vocalist. The album enjoyed airplay throughout the U.S., and news of her electrifying performances began to spread.

Soon, Austin was securing opening slots for heavy-hitters Robert Cray, Lonnie Brooks and Delbert McClinton, to name just a few. In fact, Renee specifically rallied with promoters to secure a show with McClinton, and their resulting two-night, two-city bill in March 2003 planted the seed that eventually grew into the duet ballad, "Pretend We Never Met," on Sweet Talk. Delbert witnessed the band's entire first night performance and was so taken with her voice that he immediately approached her at the foot of the stage after the show. "Girl ... you ring my bell!" he exclaimed. He offered her a prestigious performance spot on his annual Sandy Beaches Cruise in January 2004.

Austin's camp approached McClinton's management about recording together. As Reneé puts it, "I bit my fingernails for a month awaiting a response while he was on tour in Europe." When word finally came, Austin was delighted to find that, not only was he up for doing it, but that his manager, "could count on one hand the number of times Delbert's been as excited about an artist as he is about Reneé."

So it was off to Nashville for recording. "I was so nervous on the drive down," says Austin. "I've been a huge Delbert fan ever since my days in Texas. But as soon as I walked through that studio door, everything just melted away. He's so genuine - generous, funny, laid back. It put me right at ease." Although they'd not had any prior rehearsals, the entire session went almost effortlessly, with everything wrapping up in less than two hours. Austin was most struck during the first minutes of tracking, when McClinton suddenly stopped and said, "Wait a minute, Reneé, show me how you're singing it again - I wanna sing it how you're singing it." As she puts it, "already I'm thinking how blessed I am just to be standing next to him and recording, and then he asks for my input? It was like the master asking the grasshopper!" Said McClinton, "Reneé Austin gives me a lot of room to breathe when I sing with her; if you can't get her, you better get Tina Turner!"

Sweet Talk and the critical reaction that followed put Reneé on the map. Downbeat magazine awarded it 3 ½ stars. The blues community took notice by nominating the CD for a W.C. Handy Award for "Best New Artist Debut." At the Handy Awards Show in Memphis she put on a memorable performance that generated an industry buzz. Another highlight was being invited to the Ground Zero club in Clarksdale, Mississippi to take part in the filming of a PBS-TV production called "Blues Divas." It was quite an honor, considering the heady line-up of the other singers in the program - Mavis Staples, Ann Peeples, Denise LaSalle, Odetta, Irma Thomas, and Bettye Lavette.

Just as Reneé was spellbound as a child by the strength and determination of female artists like Aretha Franklin, Etta James and Tina Turner, today she brings similar passion to her own songs - and undeniable physical grit to her live performances. She's become a commanding presence at major shows and festivals across the country, having shared the stage with Los Lobos, Jonny Lang, Charlie Musselwhite, Blues Traveler, Big Head Todd & The Monsters, Keb' Mo, Vonda Shepard (Ally McBeal), Marcia Ball, and Sonny Landreth. And, Delbert McClinton has asked Reneé to open as many shows for him as her schedule allows throughout the upcoming year.

Austin's new CD, Right About Love, delivers on the promise of her previous release, reaffirming that her dramatic voice is an instrument that commands respect and knows few boundaries, and that her talent is a force to be reckoned with. Right About Love also continues Austin's musical journey, mixing blues, roadhouse rock and gospel anchored by her formidable vocal prowess, emotional commitment to every note and evocative spins on time-honored American roots music.

Right About Love finds Austin blossoming fully as a vocalist, writer, and co-producer. One standout tune is "Mouth of the Delta," which she co-wrote with David Grissom, musical director for the Dixie Chicks. Commenting on the CD, Austin said, "I approached writing for this project with the intent of making music that would again take the listener on a ride thru everyday life. When I sat down to create this disc, I wanted to focus in on one thing. Who is Renee' Austin? I came to the conclusion that my Texas roots are the foundation to my music. People ask me all the time 'What kind of music do you do?' I tell them Roadhouse Soul - blending Blues/Roots, Country and Gospel/Soul."

Whatever genre of music she performs, she invests each style with an individuality that few artists can match. Whatever the song demands, Reneé Austin can deliver - with power, presence, and soul.
19
What's This
Advertisement