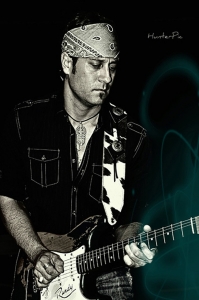 This original Singer/ Songwriter is the epitome of Texas Blues/Rock. A very close friend, the late Buddy Miles, who worked with Hendrix, said “Randy reminds me of Hendrix and SRV with his own style!” Randy Pavlock easily breathes new life into the legend. Together with the band, Twenty Four Seven, this brilliant young guitar slinger delivers the very best in hard-driving, yet heartfelt original music similar to the likes of Kenny Wayne Shepherd, Gary Clark Jr., Johnny Lang, SRV and, yes, Jimi Hendrix!

Born one of the many brilliant guitar slingers, Randy Pavlock hails from the “Blues Capital of Texas,” Navasota, who proudly proclaims him a native son. Wise beyond his years, he has risen beyond musician status to become an entertainer. One who interacts with and relates to his audience, often sharing his thoughts about life. This is a blues player who plays straight from his heart and soul. He has shared the playbill throughout his career with legendary artists such as Paul Rogers, Shemekia Copeland, Coco Montoya, Joe Bonamassa, members of Double Trouble, Omar and The Howlers, Chris Duarte, Buckwheat Zydeco and many more.

If you have not heard this original singer/songwriter and his band Twenty Four Seven, you owe yourself this treat! As quoted from a recent article, he says, “I let the music play me. Feeling is not a schedule or a map, but a guide.” A self-taught player at best, he was inspired at the age of seven by teachers and mentors such as Stevie Ray Vaughan, Jimi Hendrix and Buddy Miles.

Randy Pavlock and Twenty Four Seven has performed all over the United States, Canada and Europe. On his second tour of Norway 2007, Randy was named “King of Blues” of his generation. Randy also road managed and performed with friend Buddy Miles during the month of October in the state of Florida along with the Rocky Athas (of John Mayall). His most recent album, Transformation, was released in 2012. A new album is coming soon!

“Music has always been a part of my musical background,” he says. “It became natural to me at the age of seven, where I began playing an old guitar my father had lying around. I remember that old thing had only 5 strings on it and never held a tune,” he laughs. “Playing guitar, I always felt, was nothing I really choose to do but I believe it was a God-given talent that was handed down. When I was 15, I had an unknown illness that put me close to a near-death experience. A tragedy sometimes will make us grow up fast. I can say without a doubt that God and music saved my life!”

“I believe music is guidance,” he says. “My inspiration to write comes from things I have seen throughout my personal journeys and to putting myself in someone else’s shoes. Sometimes when we are faced with a problem we cannot solve and have no one to turn to, I believe the answer is in the message of song. After all, this is what inspires us to better our soul in this life long journey. I get a high, not from the attention of standing in front of an audience, but knowing I have reached out to someone in need. That is the best feeling that really cannot be explained!”
6
What's This
Advertisement