Radney Foster - Everything I Should Have Said 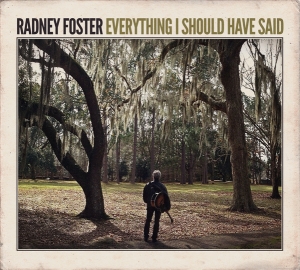 Keep an eye out for Radney Foster's excellent Everything I Should Have Said, the legendary Texas-born songwriter's first album of all new material since 2009's Revival, on May 13 via his own Devil's River Records .

A new sonic approach is clear right from the first track, “Whose Heart You Wreck (Ode To The Muse.” “The song is about the crazy struggle of inspiration and we recorded it using a bunch of found objects. The drum kit was made up of trashcans, a piece of angle iron and a big gear plate. There were a lot of Tom Waits-style atmospherics going on behind me, but I was playing a straight-up, double-thumb style guitar blues, almost like Doc Watson would have done.” Listen and imagine the floor-creaking business that once took place upstairs.

Co-producer Justin Tocket encouraged Radney to dig deep and the recordings created magic—fun, loose and lasting late into the night. Foster and Tocket intentionally didn't over polish, instead leaving all the sweat and tears on the tracks. Clear evidence: The album’s closing title track, “Everything I Should Have Said,” which Foster calls the emotional centerpiece of the record. The song and performance are breathtakingly intimate, a weary and wounded heart cracked open wide.

The elder statesman of Texas singer-songwriters has been a friend and mentor to several young artists and results speak for themselves. Foster's written songs and produced albums for Randy Rogers, Jack Ingram, Kacey Musgraves, Wade Bowen, Josh Abbott, Pat Green, Cory Morrow and many others. His songs are regularly mined by superstar acts like Keith Urban (“Raining on Sunday,” “I’m In”), Sara Evans (“Real Fine Place,” “Revival”) and the Dixie Chicks (“Godspeed”).

Foster grew up in parallel worlds – one herding cattle on horseback at his grandfather’s East Texas ranch in the summers and the other hunkered over a transistor radio in West Texas hometown, listening to border radio. “My house in Del Rio was a mile from Mexico, so I heard everything growing up – from country to conjunto.” That hybrid of influences may be why Foster’s always been tough to categorize; his first success was with the seminal country/cowpunk duo Foster & Lloyd, whose first single, “Crazy Over You” went straight to No. 1. His subsequent solo albums told tales through a honky tonk lens and yielded enduring hits “Just Call Me Lonesome” and “Nobody Wins" from his seminal high watermark Del Rio, TX 1959.

Foster has continuously stretched the boundaries throughout his 30 year career,. “I strive to challenge myself as a writer, a musician and a singer everyday.” As his voice has deepened and grown richer, so has his focus. Indeed, these are songs showcasing a fully confident man who long ago left fear by the side of the road.

Catch Radney Foster LIVE in San Antonio on April 4 as he joins forces with Randy Rogers and Charlie Robison to raise money for the John R. Foster scholarship to provide need-based scholarships to children in the San Antonio area.
26
What's This
Advertisement