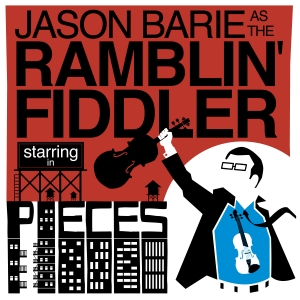 I was born October 14, 1979 in Tampa, FL. I grew up in a small community called Valrico, FL which was a suburb of Tampa. My Dad being a bluegrass and country music fan always kept musical instruments around the house in case any of us wanted to learn how to play. His grandfather was a fine fiddle player which sparked my Dad’s love of music. In 1990 through the Hillsboro County School system, while in the fifth grade I began to take violin lessons at 10 years old. A short time later I began private fiddle lessons at a store called the Bluegrass Parlor.

At the age of 14 I ended up with my first paid gig and in my first band called the Jeff Jones Bluegrass Band. At 15 I won my first Florida State fiddle competition which would total 6 times by the end of my competition days. In 1997 at the age of 17 I left home the day after graduating high school to hit the road with The Sand Mountain Boys. During my time there I was fortunate to record on the “Molly Rose” album and also to record my first fiddle album called “My Great Grandfathers Fiddle.” I was there till we disbanded at the end of 2000. In 2001 I graduated from community college and moved to North Carolina where I went to work with the group Carolina Road. It’s during this time that my interest in songwriting and tune writing began to grow. This would also be the time for my first ever nomination for Fiddle Player of the Year at SPBGMA. In 2006 I spent the year freelancing and performed a number a dates with Bobby Osborne and The Rocky Top Express as well with Jesse McReynolds and The Virginia Boys both of which I was blessed to play the Grand Ole Opry with.

In 2007 I was offered the first ever fiddle position with The Larry Stephenson Band. While there, in 2008 my second fiddle album was released called “The Past Is Present” which was nominated at IBMA for Instrumental Album of The Year. In January of 2009 I was offered a job with Doyle Lawson and Quicksilver. I spent nearly 6 years in his band. During my time there Doyle included me as part of the “Old Friends” shows which were special events shows that united Doyle with JD Crowe, and Paul Williams. I recorded on 8 albums while there, one of which that was nominated for a Grammy.

In late 2014, with a heavy tour schedule I left to work a job at home so I could be with my family more. By the end of the year though I found myself back out on the road with Joe Mullins and the Radio Ramblers.

When I’m not on the road I can be found spending time with my family that includes my wife Sarah, son Isaac, and daughter Adalynn. I enjoy repairing old fiddles, wood carving, and leather tooling.
10
What's This
Advertisement