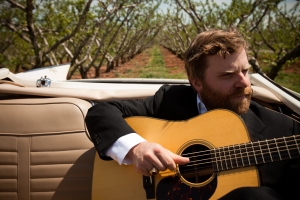 Songwriters don’t get discovered in bars anymore. At least that’s what Peyton Tochterman thought. The days of discovering one of the "next big" songwriters banging out original music in the corner of a dive on an old Martin guitar died years ago. That’s what Peyton thought. Tochterman is a former sports journalist, he has been hit by a train, had Kenny G.’s grand piano fall on his head, has helped cast bronze sculptures for renowned sculpture Cy Twombly, he has traveled across America on Harleys with his dad and has gone to the far reaches of China to record monks in temples blowing really, really big horns. And,he is also a cancer survivor. Through every step, at every breath, and in every barroom, Peyton has been, is, and will always be a great songwriter.

Peyton was putting one foot in front of the other by playing local Charlottesville bars, trying to bring his music to the world. On one night, in walked renownd songwriter Ellis Paul. A friend had brought him in to hear Peyton. Ellis introduced himself and explained that he was immediately taken by the songs that he was playing. Over the course of a few months, Ellis convinced Peyton to record a full length CD, and upon its completion, Ellis invited Peyton to take the opening slot on his national tour and stay on for the next year.

Peyton has the privilege of being the first to step foot on stage and perform at the illustrious Jefferson Theater in Charlottesville, VA, and has shared the stage with Levon Helm, Darrell Scott, Robert Earl Keen, Jason Isbell and the 400 Unit, Richard Buckner, Cheryl Wheeler, Sons of Bill, and Old School Freight Train among others.


"Peyton Tochterman has an old soul’s gift for writing the ageless, earthy songs that define what is best about American Music. His songs carry the weighty truths that make life less of a burden for those who hear them." -Ellis Paul
0
What's This
Advertisement