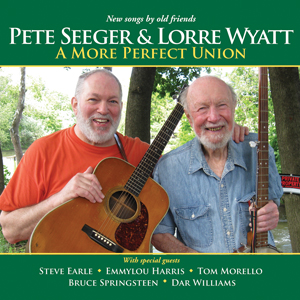 "A More Perfect Union," released on September 25, is a newly recorded collaboration between Pete Seeger and longtime friend and fellow singer-songwriter Lorre Wyatt, on which the duo is joined by newer generations of socially conscious musicians Bruce Springsteen, Tom Morello, Steve Earle, Emmylou Harris, and Dar Williams, among others.

Seeger’s abiding mission – to inspire sociopolitical involvement and personal inclusiveness through song and example – shines through the 14 songs newly co-written with Wyatt. The duo address recent and ongoing political, economic and environmental issues alongside gentler appreciations of life’s good moments, meditations on the future, and exhortations to individual action.

There’s more to this CD than political commentary. Among the more lighthearted songs are the delightfully self-deprecating “Old Apples” (“…still can make good sauce”) and “Howling for Our Supper,” a pet’s-eye view of Pete and Lorre writing “another pointless ditty” when it’s feeding time. On the heartwarming side, there are “Wonderful Friends,” first heard in a different version on one of two of Seeger’s Grammy-winning Appleseed CDs, 2008's "At 89," “A Toast to the Times,” and the closing “Bountiful River.”

Throughout the CD, Pete and Lorre share and split vocal duties; Pete plays banjo and acoustic 12-string guitar, while Lorre handles the six-string acoustic and additional banjo. Providing a warm instrumental bed are co-producers David Bernz (guitar, banjo, vocals, harmonica) and engineer-percussionist Jeff Haynes, and a host of musicians based near Pete’s Beacon, N.Y., home. The use of a wide variety of percussives adds an exotic Third World tint to many of the songs.

Seeger, 93, and Wyatt, more than 25 years his junior, have been friends for more than 40 years and have co-written several dozen songs in that time. New Jersey-based Wyatt was sidelined for much of the last 15 years recovering from a stroke but has fully recovered and is “back on [his] musical feet again.” Wyatt's best-known composition, "Somos el Barco/We Are the Boat," previously recorded by Seeger, Holly Near, and Peter Paul and Mary, among others, is reprised here in a new version that includes guest vocals by Emmylou Harris.

This CD is being released simultaneously with another new Seeger recording, the 2-CD "Pete Remembers Woody," a mixture of Pete's spoken, firsthand reminiscences of his friend and fellow musical activist, the late Woody Guthrie, and recordings of Guthrie-written songs by Pete, Woody's son Arlo, Work o' the Weavers, Cathy Fink and Marcy Marxer, and other socially conscious musicians.