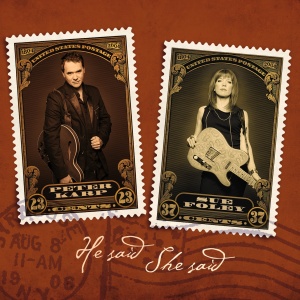 Sue Foley and Peter Karp's He Said She Said began as a simple email and letter correspondence that took on a life of its own. The letters turned into songs and the songs coalesced into a collaborative project that chronicles an evolving relationship between two enormously talented writers and performers.

These letters started as a casual exchange between two committed artists sharing common bonds of the loneliness of the road, the pain of separation from family and home and, above all, the drive to make music. But as time went on the letters they shared became more poignant, more revealing.

The songs are by turns simple, intimate, surprising, touching, and funny. They modulate easily and naturally across a wide expanse of mood and musical genre. Whether Sue and Peter are performing as an acoustic duo or with their electric band, the music encompasses elements of folk, jazz, flamenco and blues resulting in a show that is moving, literate, romantic, exciting and rocking.

Sue and Peter have previewed He Said She Said to sold-out crowds at large Canadian venues as well as at many dates across the U.S., and the response from fans has been overwhelming. They truly bring out the best in each other in performance; their instrumental skills are perfectly complementary, their voices harmonize as naturally as if they had been singing together all their lives, and the easy rapport of their between-song dialog enlivens the tale that these songs tell.

Audiences - used to the more conventional approach of a set of generally unrelated songs - are moved and enthralled by the cumulative power of these thematically linked narratives. In a review of a performance in Decatur, Georgia, Hal Horowitz wrote,

"This fascinating, unusual song cycle could easily have been pretentious, cloying and simplistic. But thanks to the musicianship and personalities involved, it was a genuine, touching concert that captivated the audience, despite the unfamiliar material."

He Said She Said is a landmark achievement, born of the special artistry and passion of these two daring and original creative musicians.

HE: Gifted songwriter and American troubadour, Peter Karp, is a master songsmith with an art for spinning true-to-life emotions, humor, and candor. With an upbringing that was equal parts southern Alabama and the swamps of New Jersey, Karp's music is fueled by the Yankee-Rebel juxtaposition. He established himself on the national scene as a critically acclaimed songwriter, an accomplished guitarist and pianist with the release of his Blind Pig debut entitled Shadows and Cracks. On the road across the U.S. and Canada, Karp repeatedly transfixes his live audiences. Critics compare his songwriting to John Hiatt and John Prine, with impressive guitar and slide licks infused by his love of Freddy King and Elmore James. Peter Karp personifies the amorphous Americana sound, seamlessly blending blues and roots music with a high sense of entertainment.

SHE: Sue Foley is considered to be one of the finest blues and roots artists working today. Born to a working class family, Sue spent her early childhood moving from Canadian town to town with her mother. At sixteen, she embarked on her professional career. By twenty-one, she was living in Austin TX and recording for the legendary blues label, Antone's Records. Her first release, Young Girl Blues, quickly established her unique talents as a blues guitarist and songwriter. Throughout the 90's she took to the road with her paisley Telecaster and honed her craft, working and sharing the stage with such artists as BB King, Buddy Guy, Lucinda Williams and Tom Petty. After moving back to Canada, Sue won the prestigious Juno award for her critically acclaimed CD Love Coming Down.
17
What's This
Advertisement