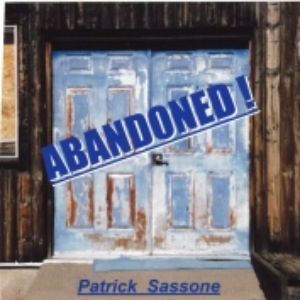 "Abandoned" is an 8 song Rock/AAA EP that includes some of the best songs Patrick has ever written. His Blues work has been very successful and fulfilling, but he has gotten back to the style of music he wrote so many years ago. Patrick feels that he has come full circle with this album, back to the time when he was influenced by all genres of music and expressed his emotions in the songs he wrote. As Patrick has always said, "music sets my soul free...to hope, to dream, to just be me".

Patrick Sassone is an international recording artist, songwriter (BMI), and actor. He began his career at the age of five with the accordion and taught himself to play the guitar in his early teens. Patrick's first group was called Patrick and The Shamrocks that consisted of two cousins, a schoolmate, and himself. They recorded a 45 for Orlyn Records called "Yes, That's What I'm Gonna Do". This group disbanded within two years. He had the privilege to meet Leonard and Phil Chess of Chess Records, who had taken an interest in his talent. The direction and guidance they gave him have stayed with him his whole life. At the time, Patrick was the guitar player and songwriter for a group called “Society’s Children”. The following year they had a regional hit with their record “Mister Genie Man” which is still available today. A couple of years later, Patrick was introduced to Curtis Mayfield at Mayfield’s personal recording studio outside of Chicago. The insight Curtis gave him, as well as the kindness and professionalism he showed, made a lifelong impression.
Patrick continued to write and perform as a solo artist in the Rock, Blues, and Country genres which eventually led him to where he is today. He has always said that music should touch you in some way. It should spark a memory, warm your heart, feel injustice, give you joy, touch your soul, stir your passion, or move you in some way emotionally. Music did this for Patrick at a young age and has continued to this day.