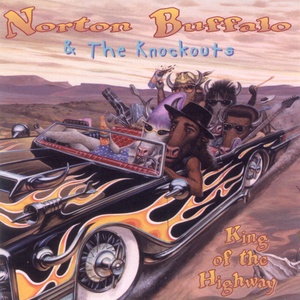 Norton Buffalo is regarded as one of the most versatile and talented harmonica players in the music business. In rock, R&B, and blues circles, as well as in new age, country, and jazz circles, he is widely acclaimed as the finest multi-genre harmonica player of our time.

His new release, King of the Highway, on Blind Pig Records, is surprisingly, his first solo release since his late-70's albums on Capitol. But Buffalo has hardly been idle during that time. For the last twenty-five years Buffalo has been a highly celebrated member of The Steve Miller Band, recorded and toured with some of the top names in music, worked in movies and television, and performed with his own band, the Knockouts.

In addition to his work on record and on stage with Steve Miller, who spotlights Norton's playing at shows and introduces him as "my partner in harmony," Buffalo has also been highly sought after as a recording artist, having played on over 100 albums by artists as diverse as Bonnie Raitt (he did that searing harmonica solo on "Runaway"), Johnny Cash, The Doobie Brothers (including the Grammy Award-winning "Minute By Minute"), Kenny Loggins, The Marshall Tucker Band, David Grisman, Juice Newton, Laurie Lewis, and Elvin Bishop.

While Buffalo has performed live before millions of Steve Miller fans over the last quarter century, his musical talents are also in demand by notable musicians such as Kenny Loggins and Olivia Newton-John, who have enlisted the harmonica ace for their U.S. touring bands.

Buffalo was born in Oakland, California into a musical family - his father was a harmonica player and his mother a jazz singer. Buffalo's great uncle won an Academy Award for his contribution to the music of "The Wizard of Oz", and worked as a film composer for MGM for a few decades, composing many well-known hits and scoring many of their classics of that golden cinematic era.

Norton grew up in the post-war housing of Richmond, California, a blue-collar, industrial town on the San Francisco Bay, giving him a culturally mixed and musically diverse background. When he was seven Norton started learning harp from his father, and won his first talent contest in the sixth grade.

In high school he began playing in rock and roll and soul bands as well as in the school symphonic band, marching band, jazz band and pep band on both trombone and harmonica. In his later school years he began listening to jazz day and night. Though he continued playing primarily in rock and roll bands his musical mistress was jazz. Norton was writing complex horn charts and having a ball fitting his harp into all types of off-beat musical arrangements and jazz-rock compositions. While in college in San Francisco, Norton was performing in bands as well as working a full time graveyard shift at a bank.

By 1972 Norton had decided to quit college and his job and devote his life to playing music. He migrated north to Sonoma, in the heart of California' wine country. Although he was still playing mostly rock and roll, he started expanding his musical horizons by getting into bluegrass, western swing and country music, all the while working on his songwriting skills and honing his vocal and harmonica chops.

Buffalo recorded several songs in 1973 with Grateful Dead drummer Mickey Hart and future Doobie Brother John McFee. In early 1975, with the idea of shopping these tapes, Buffalo moved to Los Angeles, and made a living playing talent contests, performing solo, and even acting in a play. After eight months he moved to back to the Valley of the Moon and soon after, started playing in an off-shoot of the Commander Cody Band, the Moonlighters. Later that year he started playing with Commander Cody, which led to an early 1976 tour of Europe and a live album from that tour entitled We've Got A Live One Here.

It was during this same time that Norton met Steve Miller during the recording of Fly Like An Eagle. Their musical friendship grew and after the release of that album, Norton joined Steve out on the road for his 1976 summer tour. In 1977 Buffalo released the first of two well-received solo albums for Capitol Records. His first, Lovin' in the Valley of the Moon, not only highlighted his skills on the harp, but also his talents as a songwriter, producer, and a powerful new talent. He continued to tour with Steve Miller that year, this time opening all of Miller's shows at arenas and stadiums around the country with his own group, The Stampede.

In early 1978 Norton went to Hollywood to act and play music in Bette Midler's successful screen debut, The Rose. The fall of that year brought the release of Buffalo's second outstanding Capitol LP, Desert Horizon, which featured some experimental electric harmonica as well as the celebrated Tower of Power horns.

In the early 80's Buffalo started a band with Mickey Hart and keyboardist Merl Saunders called High Noon, which performed throughout California for about a year and a half, including several shows with the Jerry Garcia Band and often featuring the stellar vocals of Joan Baez as a guest performer.

In 1987 Norton teamed up with legendary Bay Area slide guitar player Roy Rogers to form a powerful performing duet. The special magic between these two virtuosos was captured on two albums for Blind Pig Records. In 1991 they released the all-acoustic R&B. One of the tracks from that CD, "Song for Jessica," was honored with a Grammy Nomination as Best Country Instrumental Performance, and the video of another track, "Ain't No Bread In the Breadbox," got airplay on TNN. Downbeat said of the album, "All it takes is a sampling of the slide guitar/harmonica dialog on any one of these songs to comprehend how potent -and exciting -the chemistry is between Rogers and Buffalo."

The following year the pair released Travellin' Tracks, which included some live tracks as well as some studio tracks on which they were joined by a rhythm section. People magazine called the recording "an album with more bounce than a book of bad checks...a spirited mix of souped-up slide guitar and blustery blues harmonica."

The movie industry has also recognized Norton's special magnetism, resulting in several noteworthy film accomplishments. Norton has many movies to his credit, including his acting and musical role in The Rose, as well as a small part in Michael Cimino's epic western Heaven's Gate. Norton composed and produced all of the music for two feature films, Eddie Macon's Run starring Kirk Douglas and John Schneider, and Stacy's Knights, one of Kevin Costner's first films. Other films he contributed his harmonica mastery to include Dogpound Shuffle (with David Soul), Oliver Stone's The Doors (with Val Kilmer), 68 (featuring Neil Young).

Norton is no stranger to television either, with numerous TV performances down through the years with such notables as Bonnie Raitt, Steve Miller, America, Steven Stills, Graham Nash, Lacy J. Dalton, Kris Kristofferson, Roy Rogers, and Willie Dixon, even a guest appearance on Starsky & Hutch. As part of the Steve Miller Band he's appeared on The Tonight Show with Jay Leno The Arsenio Hall Show, as well as The David Letterman Show. Buffalo and his band had a full hour special on Austin City Limits, and Norton was recently featured on a segment of San Francisco's Bay Area Backroads.

Other television work included writing the music scores for two episodes of Unsolved Mysteries and playing harmonica on several episodes for both The Twilight Zone and Unsolved Mysteries. In addition, his harmonica graces several Garfield and Peanuts cartoons. Norton also sang the first theme song for the "Garfield and Friends" cartoon series. In 1994 and 1995 Buffalo released two highly acclaimed instructional videos for the harmonica on Homespun Tapes.

At home in the Valley of the Moon, when he's not touring with Steve Miller or the Knockouts, Buffalo continues to stay involved with environmental causes, community programs, as well as bringing harmonica instruction and inspiration to many California state prisons.

Buffalo's new Blind Pig CD, King Of The Highway, was recorded with his long-time band, The Knockouts, a dynamic and diverse R&B-blues-rock unit that frames the incredible depths of Buffalo's harmonica, vocal, keyboard, songwriting, and performance talents. It also features such stellar musical cohorts as Steve Miller, Elvin Bishop, and Merl Saunders. Though he's adept at many styles of music, King Of The Highway finds Buffalo standing firmly and comfortably on the blues side of town. Taking the harp from a whisper to a scream, he gives a master class of many blues harmonica stylings, all infused with his originality and truly phenomenal brand of harmonica musicianship. And his deep, soulful and penetrating vocals, though unique, also reflect the many jazz, country, rock and blues singers from whom he honed his vocal style. On this new recording, Norton Buffalo becomes the king of the blues highway, and his many fans will be thrilled to be along for the ride.
21
What's This
Advertisement