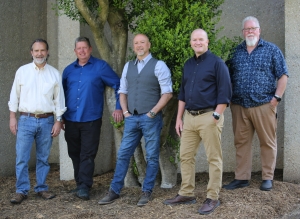 Jody King
"Gripping vocals, tight harmonies, fun music and great stories are the heart of None of the Above’s music.

None of the Above is truly a band in the strictest of terms. They create a unique form of acoustic music that is both entertaining and meaningful. With intricate arrangements, tight harmonies and great choice of a wide range of material they are a great asset to the music community.” - Jody King of Larry Cordle & Lonesome Standard Time

Blue Ridge Backroads
“Their songs tell some great stories; the instrumentals are addictive, and the harmonies are great. NONE OF THE ABOVE. A band that doesn't have to take a back- seat to the nationally charted groups." - Jay Allen, Former Host of "Blue Ridge Backroads”

Sherry Boyd
"NOTA is a tight and talented ensemble with TASTE! Their arrangements and original approach to a song make you play their recordings over & over." Sherry Boyd, multiple winner IBMA DJ of the Year

For the second time in just a few years, a bluegrass band has covered Journey’s ’80s rock classic “Don’t Stop Believing.” None Of The Above’s version is less frantic and less imitative of the original than that recorded by Pine Mountain Railroad, but is arranged more intricately and is equally worthy. Either way proves the song adapts well to bluegrass. The same can be said of NOTA’s cover of America’s “Sister Golden Hair.” Both are album highlights. Both also reflect a slight change of direction for the band, as nothing listed on their first four recordings seems remotely like these two songs.
There have also been some band member changes since the group’s last recording. The two newcomers who join guitarist Tim Sands, bassist Tim Harrison, and mandolinist David Crawford are vocalist Allison Trogdon and banjoist Jon Cornatzer. Trogdon, a polished vocalist with outside bluegrass influences, sings lead on two songs (including “Don’t Stop…”) and contributes harmonies throughout. Cornatzer takes the lead on Gordon Lightfoot’s “Ribbon Of Darkness” and swings between tradition and contemporary on the banjo. He contributes two instrumentals, the moody “Road To Bei Hei” (which is a bit short) and the lilting “Tamara” (which would work better if it were two minutes shorter).
Tim Sands still handles most of the lead singing. His expressive voice brings great texture to Julie Miller’s “Midnight & Lonesome,” Tim O’Brien’s “Turn The Page Again,” and Jeff White’s swinging country “Blue Trail Of Sorrow.” He is at his best on “Sister Golden Hair” and in a lively duet with Trogdon on Gillian Welch’s “Wichita,” an old time number. The latter revolves around a nifty instrumental riff and is arguably the best track on the recording.
There’s much to like about this CD. There’s variety with well considered and well executed arrangements. The playing is good and the harmonies tight. Keep an ear out for it. BW