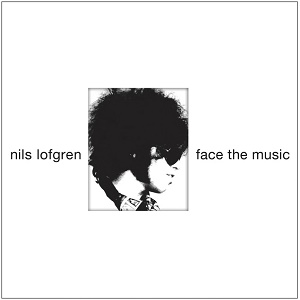 
LOS ANGELES, Calif. — The stellar work of singer-songwriter-guitarist and Rock and Roll Hall of Fame inductee Nils Lofgren receives a comprehensive retrospective in Face the Music, a definitively annotated nine-CD/one-DVD boxed set that takes in Lofgren’s 45-year solo career, due from Fantasy Records on August 5, 2014.

The collection’s music component, selected by Lofgren himself, comprises 169 tracks, stretching back to Lofgren’s early work with his Washington, D.C.-area band Grin, which he founded at the age of 17 in 1968, and surveying both his major-label solo albums and independent self-released music. Two of the CDs contain 40 previously unreleased tracks and rarities. The DVD features 20 video clips selected from a body of performances as diverse as Nils’ career.

A detailed, lavishly illustrated 136-page booklet, with an introduction by noted rock journalist Dave Marsh, contains Lofgren’s track-by-track commentary and personal reflections on his work, as well as his tours of duty as a sideman with such luminaries as Neil Young, Bruce Springsteen, and Ringo Starr. The set also contains homages to Lofgren by such colleagues as Bonnie Raitt, Joe Walsh, Sting, Bono, and Paul Rodgers.

In its entirety, the set gives a full-length, intimately detailed picture of the performer Neil Young — who hired the 18-year-old Lofgren to play piano and guitar on After the Gold Rush in 1969 — calls “an inspiration to me for many years.” A true triple threat, Lofgren has distinguished himself as the writer of melodic, affecting, and hard-rocking songs, a sensitive and seemingly ageless singer, and a guitarist of incomparable power and imagination.

Lofgren says the project was initiated during a 2012 meeting with executives from Concord Music Group. “To my surprise, they said they wanted to do this boxed set, a retrospective of my entire 45 years, of my music,” he says. “That’s how the ball got rolling. The record company had their good ideas, and then they said, ‘It’s your boxed set, so you pick.’ They asked me to make the final choices and decisions, including every song.”

Lofgren selected his own personal favorites from his four albums with Grin (1970-73) and his highly praised solo releases for A&M, MCA/Backstreets, CBS, and Rykodisc (1975-1992), many of which had been allowed to go out of print during the compact disc era. He says, “If it takes 45 minutes of work on the Internet to find one track from 40 years ago, that’s not really available in my eyes.”

Selections include such Grin classics as “Like Rain,” “White Lies,” “Slippery Fingers,” and “Beggar’s Day” (the last of which he also recorded on Crazy Horse’s 1971 debut), plus solo gems like “Back It Up,” “The Sun Hasn’t Set,” “You’re the Weight,” “Incidentally … It’s Over,” and “Dreams Die Hard.” His collaborators include Young, Springsteen, Starr, Graham Nash, Levon Helm, Al Kooper, Buddy Miles, Aynsley Dunbar, and Jeff “Skunk” Baxter.

He also culled material from 10 unjustly overlooked albums issued since 1993 on his own Cattle Track Road Records imprint and sold via his web site, www.nilslofgren.com.

“The writing was on the wall,” Lofgren says, “and in the mid-’90s I realized, look, without some hit records and some power to throw your weight around with the companies, you’re lost. Thanks to technology, I realized, ‘Now is the time for me to walk away from that and put out music I’m proud of on a web site,’ which I’ve done for 20 years. At the end of the day, I’ve continued to make solo records and release them. The downside is that it’s very grass-roots, and a lot of people might not hear about it. The upside is I’ve kept that kind of artistic freedom that I got kind of spoiled with.”

Lofgren says of the glittering group of musicians who lent their talents to his records, “Those were times that I don’t think can happen anymore. I look back and I’m quite amazed that I’ve been that blessed to make that kind of music with that cast of characters. Things like that are just magical. I never could have dreamed that they’d happen.”

Long-time Lofgren fans will find some delightful surprises on the two CDs of unissued material, which reaches back in time to his work with the pre-Grin band Paul Dowell and the Dolphin and includes rarities from the Grin era. He says, “The piece de resistance for me was finding an old master tape of Neil Young singing and playing piano on ‘Keith Don’t Go’ with Grin, and getting his permission to use it after we remixed it.”

As revealing as the music are Lofgren’s personal recollections in the set’s generous booklet, which looks at his life from his days as an accordion-playing youth in Chicago to his tours of duty with Springsteen’s E Street Band. Originally, the musician had planned to write the notes with his friend Dave Marsh. In the end, it became as close to a Nils Lofgren autobiography as we are likely to get. “Early on Dave broke the bad news: ‘This is going to be much better, and potentially a great story, if you write it and I edit it,’” Lofgren says. “I hadn’t planned on doing that kind of writing, but I couldn’t disagree with him. Hand-writing the story, it does have a completely different flavor to it. People have always asked me to write a book, and I’ve always said no. I would have to talk about my very famous friends a lot, which could probably be done with dignity, but my heart’s not in it. Dave kept saying, ‘Go deeper, write more.’ This was kind of a great excuse to share some of these stories through the history of the music. Hopefully it will give people, even fans, a deeper insight into what was going on.”

Face the Music is a much-needed in-depth look at the groundbreaking solo work of one of rock’s most underestimated, creative, and irreplaceable musicians. Summing up his monumental project, the unfailingly modest Lofgren says, “We were just grateful to play our faces off, anywhere and everywhere. To look back 45 years and to hand-pick this music and to hear it all together is pretty stunning. I’m really grateful that Concord gave me the creative license to put it together. It’s something I’ve never done before, and had given up hope of doing, and I’m very excited about it.”

Get a free download of the previously unreleased version of Nils' song 'Keith Don't Go' when you enter the sweepstakes to win an autographed Fender Stratocaster and a Face The Music box at NilsLofgren.com http://www.nilslofgren.com/