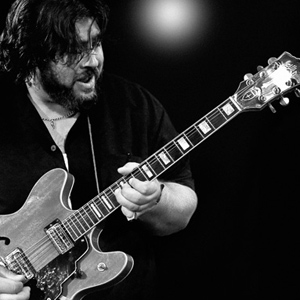 There's a ‘Renaissance Man’ revival in the music industry these days, and Nick Moss has taken advantage of it. Unprecedented upheaval in the entertainment field has thrown open the doors of opportunity for artists with vision and courage to take advantage of it. The release of Nick's eighth studio album, Privileged, is proof he has both.

After seven critically-acclaimed traditional blues albums, Nick has widened his focus on Privileged in order to absorb song forms and influences beyond the scope of those heard on his previous albums. Not every artist is willing to challenge themselves to grow, explore, and expand. For Nick, that has become second nature.

Most artists spend years honing their skills in order to shop themselves around to different labels, hoping someone will believe enough in their potential to take a chance on them. Nick didn't waste time waiting for someone else to believe in him. He had the passion, confidence, and drive to start his own label, Blue Bella Records, in order to pursue his dream and artistic vision.

Before Nick forged his own direction, he spent time learning about the life of a musician by playing with some of the greatest bluesmen of all time.

Nick’s schooling began in earnest when he got the call to play bass with the great Chicago guitarist Jimmy Dawkins. Shortly thereafter, he hooked up with the Legendary Blues Band, featuring Muddy Waters Blues Band alumnus Willie “Big Eyes” Smith on drums. “That was one of my favorite bands,” he recalls. “I still love Willie. He is like my second father.” The next deep-blues learning period for Nick, who’d switched over from bass to a six-string, was in the band of Jimmy Rogers for three years in the mid-’90s. From Rogers, he learned all about the special ensemble sound of authentic Chicago blues, coming to understand the importance of listening closely to and reacting to his fellow players on the bandstand. “Listen to early Muddy Waters stuff with Jimmy and Otis Spann and Little Walter,” says Nick of the original model. “It almost sounds as if they’re playing on top of each other, but they’re staying out of each other’s way. It almost sounds like they’re all soloing at the same time.”

With his blues graduate studies completed by the late ’90s, Moss launched his band, The Flip Tops and Blue Bella Records. Their first album, First Offense, was followed by Got a New Plan in 2001 and two years later a third album, Count Your Blessings. The latter two received W. C. Handy award nominations, and Count Your Blessings included ace contributions by Nick’s friends Sam Myers, Anson Funderburgh, Willie Smith, Curtis Salgado and Lynwood Slim. June 2005 saw the release of fourth album Sadie Mae, named after his beautiful baby daughter. Sadie Mae was nominated for 2006 Blues Music Awards as Album of the Year and Traditional Blues Album of the Year.

Those first four studio albums and relentless touring helped Moss build a devoted audience. That following was so excited about the music they were hearing in clubs across the country night after night that they not only encouraged Nick to release a live album, they helped make arrangements for it. Live at Chan's, released in 2006, was nominated for Album of The Year, Traditional Blues Album of the Year, and saw Moss nominated as Guitarist of the Year at the 2007 BMAs. What made the album so successful? Nick made certain the night they rolled tape was just like any other night when he and his band took the stage. “I wanted to make sure that the CD reflected the spontaneity of our live performances. I’ve been blessed with an extremely talented band; each one of us is a multi-instrumentalist and has no problem switching it up during our shows! We have had nothing but compliments from our audiences after they see how the guys and I take turns on different instruments as we did on this particular night.”

Moss followed his first live release up with a double album Play It 'Til Tomorrow. By expanding with a second disc, the band was able to present another serving of live, loud, and raucous electric blues as well as showcase their ability to strip their sound down to the bare, acoustic essentials. Play It Til Tomorrow once again featured Oshawny on keyboards (he switched over to bass on four tracks and second guitar on another) and Hundt on harp and vocals (he also played bass, rhythm guitar and mandolin on the disc). Special guests Eddie Taylor, Jr. and Barrelhouse Chuck made their presence felt too. This impressive double release went on to be named among the “Decade’s Best Blues: 25 Great Albums That Defined the Past 10 Years” in Blues Revue Magazine in 2010.

The acclaim Live at Chan's garnered convinced everyone that a sequel was definitely in order—and the sooner, the better. Thus we have Nick and the band’s new CD: Live At Chan’s: Combo Platter No. 2, with special guest Lurrie Bell. The set once again captures what this uncommonly hard-hitting, endlessly versatile crew does best: live and lively Chicago blues, deeply rooted in postwar tradition with a heady infusion of contemporary energy.

No matter how far he travels, geographically or stylistically, the pull of Chicago and his roots there are never far from his mind. “I feel like I’m one of the only bands from Chicago that’s actually still playing Chicago blues the way people think of Chicago blues,” says Nick. “I’ve gotten [praise] from a lot of the old-timers that have seen us play, even guys that are not from Chicago like Kim Wilson, Rod Piazza, and Charlie Baty and Rick Estrin of Little Charlie & the Nightcats. [They say] it’s great to see there’s actually a band from Chicago that actually plays Chicago blues.”