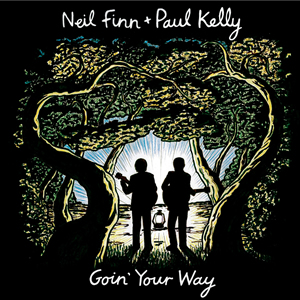 Two of Australia and New Zealand’s best-selling and most revered singer-songwriters, Neil Finn and Paul Kelly, toured their home country together in 2013. Their performance at the Sydney Opera House was recorded and released there as Goin’ Your Way later that year to acclaim, reaching the Top 5 on the charts and being certified Gold. Unfortunately, it was only available as a high-priced import outside of Australia & New Zealand. Omnivore Recordings is proud to share this incredible document with the rest of the world.

Goin’ Your Way contains 29 tracks on two CDs, including staples like Kelly’s “To Her Door” and “Before Too Long” and Finn’s “She Will Have Her Way” and “Sinner.” The duo also dips back into the canon of hits from Finn’s previous bands and collaborations—Split Enz’ “One Step Ahead” and “Message To My Girl,” The Finn Brothers’ “Won’t Give In,” and “Better Be Home Soon,” “Four Seasons In One Day,” and “Don’t Dream It’s Over” from Crowded House, among many more.

Featuring beautiful, full color art, and also available Digitally, Goin’ Your Way contains over 30 years of classic songs, performed live with a full band (including Kelly’s nephew, Dan, on guitar, Finn’s son, Elroy, on drums, and Zoe Hauptmann on bass) to an adoring crowd. The people in attendance knew it was special. Now, it’s the world’s turn to experience the magic of Neil Finn, Paul Kelly and Goin’ Your Way.
28
What's This
Advertisement