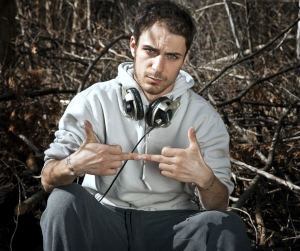 Born to be hated, dying to be loved.....Tattooed around his wrist, no words are more true when describing the German born wild child that is N!ck Freddy. Off center, sporadic, and eccentric at best, he is the ultimate kamikaze rapper, never taking into consideration what he may be exposing about himself to his fans and how destructive it could turn out to be. It doesn't faze him as he loves to push buttons to the point of being hated. Freddy (as he's known to his friends) is great at getting under peoples skin when he wants to be. Known for his insightful lyrics that delve deep into his psyche and his standard switch ups, he keeps the listener on their toes with information about himself that most others would never consider disclosing, especially at such a young age. It is because of this honesty and versatility that he has started gaining comparisons to Eminem, but he shys away from such notions. "Em's the greatest there is, was, and/or ever will be. PERIOD. People need to stop saying that kinda **** coz I'll never be Em, or anywhere close to as good of an MC. I'm just tryna be N!ck Freddy......Obviously Em influenced my music, as well as my life, and shaped parts of me into who I am today, in ways most people can't even fathom or understand. I mean let's face it, music IS my life. It's the only thing I've ever understood or that's made sense to me, so it's just the natural progression of things, but don't try and put that kind of pressure on me because I can only be N!ck Freddy." He clearly wants nothing to do with it. On the verge of releasing his 1st full length album under the Hektic Records shield he is about to face an upward battle of trying to fend off those comparisons (having Cashis formerly of Shady Records [Eminems record label] featured on it won't help those one bit either). Armed with tracks such as "Second Chances", "All I Havent Given", and "Overdose", he is ready to take the next step forward in creating a name for himself, all the while making listeners love him, while they hate doing so.
0
What's This
Advertisement