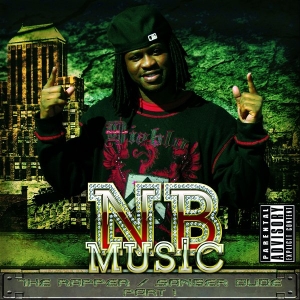 N.B. real name Norris Bennett. Home Town Douglas GA, (South Georgia) Fleetwood circle. Due to his father being in the military, he did a lot of traveling roaming from the north to the south of the U.S. No matter where he was, as a young boy, he always had the passion to sing and perform. Starting at age 4, N.B. would put on performances for his family and neighbors. Whenever the music played, he was on the center floor singing and dancing. He realized that he had talent when family and friends of his parents would pay to see him perform.
As a teenager, he strayed away from music, and got into other things that interested him at the time (girls, clubbing, and drinking), and then soon found out they were no good for him. No matter how hard N.B. fought it, singing was still in his heart.
A man on a mission to be heard, N.B. started mastering his singing voice. Once perfected a year later he started rapping. Some of his artist influences are; Ludacris, T.I, Usher, R.Kelly, Musiq Soul Child, and T-Pain, just to name a few. At the time he was currently working at Wal-Mart Distribution and knew no one would see his talent there. So he quit his job to fulfill his dream of being a superstar.
He’s had live interviews at WATS 1420, Radio interviews at HEW Ent, Radio in Canada. Was in the Winter Issue of O.C.M.C The Magazine, Artist of the week at WISH Da Beat.
I had my own featured stop called “truth time” with DJ D.B.E. I was Virtual City Artist on the month. I’m on DJ Money Mike of Slip-n-Slide DJ's mix tape called the Moneymayd Mixtape. My music is played on Fearless Radio. I've also performed at Club 1421 in Anderson, SC, Wingit in Clemson, SC, Coconut Grove in Lithonia, GA, Club 29 in Atlanta, just to name a few. I just completed a Mix tape that’s now flooding the street of GA all over. I am currently working on my album that’s sure to be a hit.