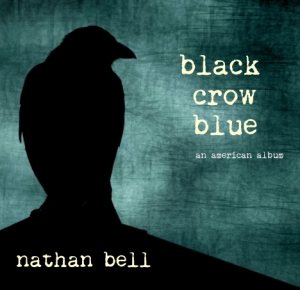 A Cinematic, plainly spoken, and intimate musical journey through a life in working America. Get ready to be inspired.

"Somewhere beyond the blurry horizon line, beyond the stark light of Springsteen's Nebraska and Capote's In Cold Blood, Nathan Bell started walking. Not literally. Not metaphorically. No, in songs. Fourteen of them: harsh light, black & white with a few cold shades of grey portraits about what it means to be unseen, to be a stat, a bar code, an unintelligible fuzzy blur .... There is no pretension here just a man citing the matches set to his creative spirit." - Holly Gleason, No Depression

"The Ameican landscape Nathan Bell captures in Black Crow Blue is bleak and lonesome but also graced with courage and nobility. These are unsparingly honest songs with the diamond-edged eloquence of Hemingway's prose. Bell draws upon literary inspirations (including the acclaimed poetry of his father, Myron Bell) to craft his lyrics, then sets them to guitar-centered melodies rooted in classic folk and blues forms."
- iTunes Staff Review

"This maverick walked away from the music biz at a time when his style of twangy alt-country could have ruled the world. Nearly two decades later he's back with a new album of devastating import." - Holly Gleason, Option