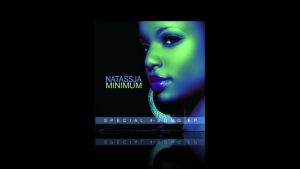 Natassja is a soul music artist whose contribution to the genre challenges the notion of what contemporary soul music should be. Her urban-influenced and sometimes moody, folk-tinged arias involve more than a moderate degree of genre bending. At times, she even blurs the genre. This is an artist who is just as comfortable listening to the gritty elements of southern trap music as she is listening to Raheem DeVaughn soul, or the music of Clannad, Bjork and Thunderheist. From the folk of Dylan and Baez to the contemporary styling of Sade and Sting, Natassja steeps herself in music that moves her spirit.

An “eighties baby”, Natassja had trouble fitting in with her peers and had many challenges as a result. However, at 16, things changed dramatically when a family friend who was also a producer, heard Natassja hum a pretty tune he hadn’t heard before and asked her to sing it for him. She delivered the self-penned tune in a way no one had anticipated and hit a home run. The song, Giving You My Heart, still remains one of her most beautiful compositions to date.

Music would become the counterpoint to this artist’s troubled life. Being able to express herself through this medium felt empowering and precious to her. It allowed her to experience something better than the struggle she was accustomed to. Through song, Natassja found her artistic voice. And with it, she could tell not just her own stories but the stories of others like her.

The first chapter of that story was issued in her debut EP – Flow: The Birth of Kozmik Soul, released July 2008. This marked the first time in this budding artist’s life that she offered others a peek into the world as viewed through her lens.

Fans on the internet began discovering Natassja’s EP through social media streaming, digital downloads, and p2p file-sharing. Standout tracks, Gravity and Flow emerged as fan favorites and were placed in rotation at a number of rhythmic and soul internet radio stations across the spectrum.

A dedicated corps of fans that loved what they were hearing, began to tell their friends about the music and continued to follow Natassja’s progress. Natassja, grateful to her small but growing tribe for embracing her other-worldly music, named them the “Starchildren”.

With the friendships forged through Flow, Natassja decided to reprise the experience. Along with band members Bill Turpin, Conroy Gooden, and Sinclair Davis, she embarked on an enhanced course of storytelling that would result in her latest musical chapter, titled Minimum. Minimum is a special 4-song EP that becomes available to her fans and new listeners, March 2010.

Not bashful about taking creative license with her work, Natassja engages in the kind of habitual genre line-stepping that often threatens to re-define her category as something else. But the genre her music fits into isn't as important to Natassja as giving voice to the music she hears in her head. And we're glad of it because she paints gorgeous mood-scapes with music that soothes the souls of angels, warriors, and savage beasts alike. Simply put, she creates music for the heart, mind, and soul.
2
What's This
Advertisement