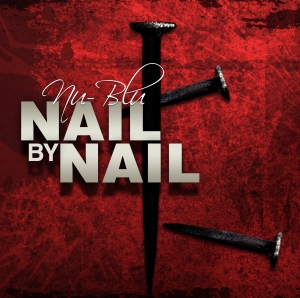 
About Nail By Nail:
Nu-Blu’s latest release on Pinecastle is an all-gospel album. The group was started by husband and wife team Daniel (guitar and vocals) and Carolyn (bass, lead vocals) Routh nearly a decade ago. They tend toward a contemporary bluegrass sound and this CD is no different. Don’t expect to hear their version of “Life’s Railway To Heaven.”
Traditionalists or not, there are some powerful songs in this collection and Nu-Blu does an excellent job presenting them. Bandmates Levi Austin (banjo, vocals) and Austin Koerner (mandolin) are joined by Greg Luck (IIIrd Tyme Out, J D Crowe) on fiddle along with the Rouths, all good musicians, providing excellent support for the vocals.
“The Abyss,” a haunting melody based on minor chords, is a plea for help because “Hell has called my marker in.” It’s the story of a person captured by sin and standing on the abyss of Hell. Starting with just Carolyn Routh singing and the guitar behind her, the mandolin and bass come in on the second verse, then it builds with the fiddle. By the time the banjo kicks into the break you’re captured by the song. What an excellent arrangement. “The Carpenter” has an easy-going sound, praising Jesus as a part of the singer’s life. Aside from the instrumentation, this could have been done by (no pun intended) the Carpenters. If you listen to just the melody it has the same kind of flow as many of their songs.
For Christian impact, the strongest song is “Hammer.”
"The sound of a hammer on the nails
As it echoes through the hills
The pounding of the heart that they must kill
And I can’t erase it from my my mind
Though I’ve tried so many times
I’ll never forget the hammer on the nails"
That’s a song that will stick with you, you can mark it down.
“Martha and Mary” (from the pens of Becky Buller and Nancy Cardwell [former executive director of IBMA]), taken from Luke 10:38-42, is the oft repeated story of two sisters, one intent on meal preparations for the visiting Jesus while the other listens at his feet. It compares the singer to Martha, anxious to take an active role in her Christian walk. You don’t have to be a bluegrass fan to enjoy and be moved by this CD, and it should appeal to most of the bluegrass world, too.

6. WHERE DID YOU GET THAT WATER (2:24)
Songwriters: Tim Stafford, Jon Weisberger
Publishers: Daniel House Music (BMI), Use Your Words Music (BMI)