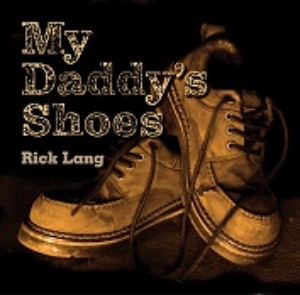 "My Daddy’s Shoes" is a touching tribute

Nashville, TENN --- Although he is one of Bluegrass and Gospel music’s most prolific writers, it took three decades for New Hampshire-based songwriter, Rick Lang, to find just the right words, and to focus on the ideal story to honor his father, the late Walt Lang.

Now, in a deeply touching song entitled “My Daddy’s Shoes,” the award-winning song man has collaborated with artist and studio maestro, Troy Engle, for a radio release in advance of Father’s Day 2019. The song, featuring words and music by Lang, with the vocals and musicianship of Engle, will be released on Lang’s own RLM Records. It was recorded at Troy Engle's The Track Shack Recording Studio in Glen Rock, PA.

"It took me thirty years to come up with the words to properly pay tribute to my dad’s life in a song," Rick says. "I sincerely hope that ‘My Daddy's Shoes’ helps to enhance everyone's Father’s Day celebration this year, and for many years to come."

Rick and his wife, Wendy, have also established a scholarship in honor of Rick’s father, who passed away in 1989. The Walt Lang Family Scholarship will benefits students at the Seacoast School of Technology in Exeter, NH who want to enter the trades. The award also recognizes the many contributions Walter R. Lang made to the Exeter area during his lifetime, especially in regard to vocational education.
"My father was a devoted father, family man, and a true patriot," Rick says. "He set a lasting example of hard work and service."

Rick Lang is a graduate of the IBMA Leadership Bluegrass Class of 2012, currently chairs the IBMA Songwriter Committee and is active in the IBMA Songwriter Mentor Program. His songs have been covered by many of the most renowned artists in Bluegrass and Southern Gospel music, with more than 80 recordings in his career to date. Most recently, Lang released Gonna Sing, Gonna Shout on Billy Blue Records. The album is a collection of Rick’s originals, performed by some of the top names in music. His creativity has been recognized with nominations for GMA (Gospel Music Association) Dove awards and IBMA (International Bluegrass Music Association) awards.

In honor of Father’s Day, the songwriter is making downloads of the song available for free through his website.

“My Daddy’s Shoes” is yet another in a number of collaborations between Rick Lang and Troy Engle, whose resume as a sideman reads like a who's who of Bluegrass and Country Music. Engle has played notable festivals as well as the Grand Ole Opry with artists including Patty Loveless, Larry Sparks, The Isaacs, and Buddy Jewell. He's written award winning bluegrass hits with Dixie and Tom T. Hall, and composed music for TV shows The Voice, American Pickers, Duck Dynasty, and Pawn Stars.

Recently, Engle stepped center stage with his own original music, forming the band, Southern Skies. Troy is a songwriter, multi-instrumentalist and recording engineer.

"Working with Rick is always a pleasure,” Engle says. "He is so sincere, and calm, but yet at the same time he has this childlike interest, passion and drive for songwriting. His love for writing and for people really shows. He is always about the collaboration, and what’s best for the song, is first and foremost."

"My Daddy's Shoes" is available to radio programmers on Airplay Direct at the following link AirPlayDirect.com/mydaddysshoes

“This is a really cool song by Rick Lang about trying to fill your Dad's shoes, delivered with conviction in a modern acoustic country style by Troy Engle. Rick is a relentless writer, always ready to write and push his craft forward. It's a pleasure to call him a friend.”
– Tim Stafford

“As we approach Father’s Day, I cannot think of a better tribute to one’s dad, than composing a piece of music to honor him. I didn’t know Rick’s pop but listening to this emotional song, I feel like I do now. What an incredible, heartfelt ode. It moved me to tears, as it brought back memories of my own father & how I tried many times to fill his shoes (a task for me and I would wager for most of us), that cannot be done. Rick, I know your dad would be so proud of this wonderfully crafted song. Thank you for sharing it with me, my friend. Happy Father’s Day.”
– Larry Cordle
“The love behind the words from Rick Lang’s pen are clearly evident, and invoke the inevitable smiles and tears while remembering my own monumental efforts to fill “My Daddy’s Shoes.” Beautiful song.”
– Carl Jackson
“Over the years one begins to realize our dads knew more than we thought they did. This beautiful new song "My Daddy's Shoes" by Rick Lang puts it all in perspective and renews the memories of the love that father's give to each of us.”
– Jim Fisher, Acoustic Crossings WGCS