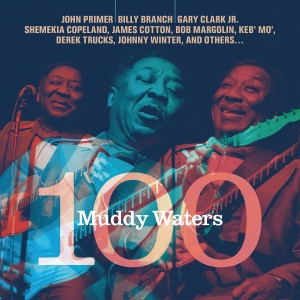 MUDDY WATERS 100 is a contemporary tribute
to Muddy’s music and legacy on the occasion of his 100th birthday.

This album is defined by the seminal and incalculable influence that Muddy's music has had on all popular forms of American music, an influence that would revolutionize music around the world.

Country blues were Muddy’s roots and remained at his core, but through the force of his artistry he transformed them. With electricity, volume, the weaving of bass and guitar lines with piano, harmonica and drums, he created the ensemble sound and subsequently the template for future Rock and Pop groups. His music’s raw power and energy, plus his attitude and magnetism—Muddy was the prototype for the iconic Rock‘n Roll star—are still the major ingredients that inspire the popular music we listen to today.

From the 1940s through the 1950s, Muddy’s blues were evolving. This evolution and innovation are the guiding principles and driving force of MUDDY WATERS 100. This tribute reflects a deep respect for tradition—with the participation of alumni of Muddy Waters' groups—and also puts an emphasis on the future of the blues through the participation of pre-eminent contemporary artists who have embraced this music and given it its future.