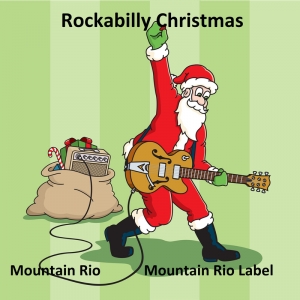 All Mountain Rio songs are recorded in Nashville by producer Stacy Hogan using some of Nashville's top session musicians and feature the wonderful vocals of Mike Lusk.
Mountain Rio songs are catchy, infectious and great to dance to and appeal not only to country and country rock lovers but also to pop lovers and indeed anyone who likes a melodic song, well sung and well recorded.

Mountain Rio started releasing music in 2008 and since then they have charted in many independent charts and have had several hits in the World Independent chart, most recently at christmas 2020 with the very popular 'Rockabilly Christmas' which was also featured in regular rotation on over 40 top Country radio stations and was estimated to have reached number 60 in the unofficial country christmas chart.

‘Sun Tanned Bikini Girls’ is the current release from Mountain Rio.It is catchy, infectious, irresistible to dance to and a guaranteed floor filler.Full of sunshine, happiness and cheer, once heard you won’t forget it.

In April 'Sun Tanned Bikini Girls' reached number 10 in the daily play mpe streaming chart and was downloaded and played on radio by over 30 country radio stations.

Mountain Rio have a large back catalogue of music available on Spotify and all other major download stores and plan to use Airplay Direct to re release these over the coming months.