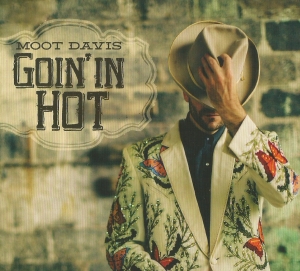 
Moot Davis had to triumph over several trials by fire to create his fourth album Goin’ In Hot, due out April 15, 2014 on Crow Town Records through Burnside. Just days after the song mixes were done, the studio where he recorded the album burned to the ground. Miraculously, engineer Joe McMahan was able to extract the mixes from the hard drive of his melted, water-soaked computer. Besides being thankful no one was hurt in the blaze, the New Jersey born Davis also feels very lucky that the music was saved — “that it was meant to be.”

In a twist of fate, Davis actually had already chosen the album title Goin’ In Hot before the fire happened. In fact the cover art, featuring a burning house, was done months earlier. The artwork also includes a dead crow clutching a wedding band, which refers to the disc’s other “trial by fire” — Davis made this record while recovering from the end of a longtime relationship. “I was so broken up about it just not working that I wrote from there,” Davis admits. The heartache and sorrow he explores on such songs as “Love Hangover,” “Made For Blood” and “Used To Call It Love” results in his more personal set of lyrics.

The emotional turmoil also served as a creative spark for Davis. “It opened me up to taking a lot of chances musically and not really caring about playing it safe.” After three retro country-based albums that drew favorable comparisons to Hank Williams Sr. and Dwight Yoakam, Goin’ In Hot leans more towards the roadhouse rock than the honky-tonk.

Davis, who grew up in New Jersey listening to classic rock, found inspiration for this album in reading Keith Richards’ 2010 autobiography Life. “That turned me onto open G tuning,” Davis reveals. “Most of the album was written on a 5-string open G Telecaster and that changes things.” This influence can be heard in the fiery guitar work that ignites tracks like “Goin’ In Hot,” “Walk Alone,” “Ragman’s Roll” and “Midnight Train,” while the swamp funk of “Made For Blood” has a Little Feat-like vibe.

But Davis doesn’t turn a cold shoulder to country music on the release. The workingman’s lament “Food Stamps” is just one of several tunes enhanced by the pedal steel’s lonesome whine. With “Wanna Go Back,” Davis delivers a regret-filled ballad that could have come from a classic Merle Haggard album. The song, Davis admits, wasn’t an easy one for him to record. “It was emotionally hard to do. I still get a lump in my throat when I hear it.” He also states that the heartache he was experiencing came out in his singing. “I was hurting for real so I just didn’t care to be guarded vocally.”

Although many songs came out of his busted relationship, Goin’ In Hot isn’t strictly a break-up album. Love is cast in a positive light in “The Reason,” a heartfelt song about a son giving thanks to his mother. Davis wrote it over a decade ago when he was a broke, struggling musician in Nashville. He couldn’t afford to buy a Christmas gift for his mom so a friend suggested that he write her a song. The tune provides a nice balance to the disc’s tales of heartache. Davis goes in a totally different direction on the album closer, “25 Lights.” Suggesting Billy Lee Riley’s “Flying Saucer Rock ’n’ Roll” orbiting on acid, this wild Marfa, Texas-inspired alien tale is the craziest track Davis has recorded to date.

Assisting Davis on this musical and emotional journey was his regular band, The Good Americans featuring bassist Michael Massimino, drummer Joe Mekler and guitarist Bill Corvino. Having road-tested these tunes together, the guys were primed when they got to the studio needing only one or two takes to get everything right. Helming the recordings was guitarist/producer Kenny Vaughan (Marty Stuart, Lucinda Williams), who produced Moot’s previous album, 2011’s Man About Town. Vaughan’s contributions included playing the otherworldly theremin on “25 Lights.” He brought an “enthusiasm for the songs that really drove the whole process,” according to Davis. “I think he had fun making this album; it was a departure from what he is normally involved in.”

Vaughan was especially instrumental in bringing Nikki Lane to do a “Hurtin’ for Real” duet. “Kenny said he just finished working on a great new album by Nikki Lane for New West records. We got in touch with each other and she showed up on the first day of recording for the entire album. We had 45 minutes of fun knocking her part out — the song’s title “Hurtin’ for Real,” comes from a silly saying ‘for real, for real’.

The idea of making an album at all seemed remote to Davis only a few years ago. After recording two albums for Little Dog Records, he found himself in label limbo. He began to seriously consider quitting music and working on a friend’s Madagascar plantation when, out of the blue, he was released from his contract. He celebrated his new-found freedom with Man About Town, which critics hailed as a “gem,” “triumph” and “a beautiful album.” NPR Weekend Edition observed that “Davis plays rockabilly, honky-tonk and what some critics have called ‘thinking man’s country’.”

Along with writing and recording the new album, Davis has also joined forces with Executive Producer and band mate Michael Massimino to create a new label, Crow Town Records, through which Goin’ In Hot will be released. “Now I feel great and I like the direction my music is headed in. I have a positive feeling that something good is in the works and the stars are aligning.”